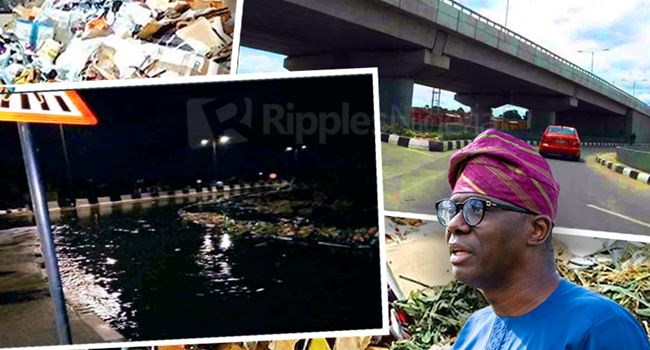 Barely three weeks after the commissioning of the Agege-Pen-Cinema Flyover Bridge by the Lagos State Governor, Babajide Sanwo-Olu, with a lot of pomp and fanfare, the torrential downpour that occurred on Monday and Tuesday, has exposed the drainage lapses bordering the 1.4km dual carriageway.

The flyover project which was started by the administration of former Governor Akinwunmi Ambode in 2017, was commissioned and opened to the public on Friday, March 5, 2021, by the present administration in an event that had all the markings of a political rally, with streets in the area named after prominent Lagos politicians including the National Leader of the ruling All Progressives Congress (APC), and former governor of the state, Asiwaju Bola Ahmed Tinubu.

The opening of the bridge and the dual carriageway was meant to bring an end to the chaotic traffic situation and the incessant gridlock on the Agege-Iju-Pen-Cinema-Ogba-Abule-Egba axis as well as sanitize the area with the underground jacking drainage system reportedly put in place.

But the stunning edifice and the drainages which were meant to bring sanity to the refuse and flood situation in the area was shamed by the rainfall, a testament to the fact that a good thing, can also give birth to a bad situation.

Though the issue of flooding and refuse in Lagos has become perennial and somehow endemic as many parts of the state get flooded after every downpour, the Sanwo-Olu administration had come on board with the promise that it had the magic wand to tackle the problem head on.

To show his seriousness, the governor named APC stalwart, Joe Igbokwe, as his Special Assistant on Drainage Management with the reasoning that with Igbokwe at the helms of affairs, the persistent malaise of clogged drainages, canals, channels and flooding in the state will be a thing of the past.

But as it stands, it seems the lofty purpose of that office has been defeated as Igbokwe has not been up to the task, apart from throwing barbs at the opposition parties and anyone who is not a supporter of the APC.

Penultimate Sunday, when a flood engulfed a newly built road in the Sango Ota area of Ogun State, Igbokwe put up a cryptic tweet where he mocked the Ogun State government for doing a shoddy job and asked that the governor, Dapo Abiodun, consult him (Igbokwe) so he could help the state in clearing their drainage system.

At the commissioning of the Agege-Pen-Cinema flyover, the Special Adviser to the Governor on Works and Infrastructure, Aramide Adeyoye, had called on Agege residents to stop indiscriminate dumping of refuse inside drainage channels, which compounds flooding and degeneration of roads.

Adeyoye had urged residents to take ownership of the newly constructed Agege-Pen-Cinema flyover and support government efforts to address flash flooding around the bridge and other parts of the state.

She had added that the incidents of flooding experienced at the Oke-Koto area and environs after every downpour was caused by “clogging in the main collector drain conduits along Capitol Road.”

The Special Adviser also said the Agege-Pen-Cinema flyover was designed to eliminate perennial gridlock across intersections while the adjoining roads had adequate drains to mitigate recurrent flooding associated with the corridor.

“The indiscriminate dumping of refuse inside drainage channels by the residents of Agege community was solely responsible for the severe clogging and siltation of the drains, thereby resulting into the flooding as experienced recently at Oke Koto,” she had said.

“At the moment, the Babajide Sanwo-Olu’s administration is making efforts to reduce the number of bad roads in the state. A drive through the streets and highways of Lagos will reveal that roads had either been repaired or are being fixed across many locations.

“Any road is as good as its drains, once we clog the drains with refuse, we compromise the integrity of the pavement and overall riding surface.

“…Sustainability requires we engage with the citizenry, to register in their sub consciousness and also seek their support in terms of taking ownership of the roads, and to guard jealously these collective assets against misuse and abuse,” Adeyoye added.

Well, the admonitions of Adeyoye seemed to have fallen on deaf ears as the rainfall further exposed the true position of the situation as flood, refuse, debris, gridlock and chaos took over the new bridge on the morning of Wednesday when Ripples Nigeria conducted an on the spot assessment of the situation which saw a lot of residents lamenting the situation.

We spoke to a cross section of residents, commuters, traders, artisans and passersby and they all had tales of woe to tell.

“My brother, it is really pathetic that just a few weeks after the Agege-Pen Cinema flyover and drainages were commissioned, we have gone back to what we used to have here. As you can see, it means the contractors did not do a good job because how does one explain a situation where they told us that flooding will be a thing of the past?

“It shows clearly that the government does not care for the people. Why did they hurriedly commission the bridge if they had not carried out an integrity test and be certain that everything was in perfect condition?”

“I was at work on Tuesday but when I came back in the evening, the whole area was flooded. My street, Omitola Street, is very close to the express and as such, my street became a channel for the water and the whole street was flooded.

“Many houses including mine suffered greatly as water found its way into our rooms, destroying our properties. People who were not around to salvage their belongings were mostly affected. All my electronics were destroyed. It is rather pathetic that such an edifice which cost a lot of tax payers’ money could go bad just a few weeks after the commissioning.”

“When Governor Babajide Sanwo-Olu and the Lagos State government hastily commissioned the flyover, I knew within me that it was just a political gimmick to play to the gallery. You needed to see how they turned the commissioning into a political rally of some sort.

“Imagine spending such huge amount of money on this kind of project, without taking cognizance of where water will flow when it rains. They had promised us that once the bridge and the drainages have been completed, we would never see flood or refuse again but what we witnessed from Monday till today has been pathetic and an eyesore.

“In fact, before the flyover was constructed, it was not as bad as this but looking at the situation, it means we would be in for a tough time as the rains have not even started.”

“My brother, what do you want me to say? You have seen for yourself what we have been going through since Monday when the rains started. I am a vulcanizer and for four years, they made life difficult for me and my colleagues while they were constructing this bridge.

“They chased us away, destroyed our means of livelihood and demolished our shops. We thought they will give us something that will bring an end to the flood in this area but now, we have seen that the reverse is the case as the situation is not different.

“This area (Pen Cinema) is even better. Go to Orile, Capitol, Oke-Koto, Railway, Total, Anipupo and Omitola and you will see what I am talking about. The water could not find anywhere to pass through due to the blocked drainages and as a result, those areas had to suffer for the inefficiency of the contractors.”

“With the commissioning of the flyover, we had thought we would no longer face the kind of traffic that we used to have around Pen Cinema, Iju-Ishaga, Fagba, Ogba, Capitol and Oko-Oba but since Monday, we have been going through hell.

“The flood water has destroyed my vehicle and our passengers are the ones suffering from it because we have no option but to transfer the cost to them. I will say that this government is a big shame. After spending so much money on the bridge, this is what we have.

“I live at Agbado-Crossing and last night, I could not get home until around 1am because of the flood and the traffic that took over the whole road. We are not happy with Sanwo-Olu.”

“This flood has destroyed my business and I don’t know what to do right now. My shop was destroyed on Monday night with all the food items I kept there in the night. And the government had told us that when the flyover was completed, we will not have flood again.

“In fact, before they constructed the flyover, the flood was not as bad as this. What do I do now? How do I take care of my family as a widow? Who will come to my aid?”, she lamented.

Pathetic as the situation may seem, it is left to be seen what strategies the government would adopt to ameliorate the condition of the Agege-Pen Cinema area in face of the resurgence of the flood and refuse taking over the place a few weeks after the commissioning of the bridge.

But it is the people of the area who have been bound to the Philistines if the necessary steps are not take to clear the drainages and take proactive measures to avert future occurrences.

Calls and messages to the Special Assistant to Governor Babajide Sanwo-Olu on Drainage, Joe Igbokwe, went unanswered at the time of filing in this report.