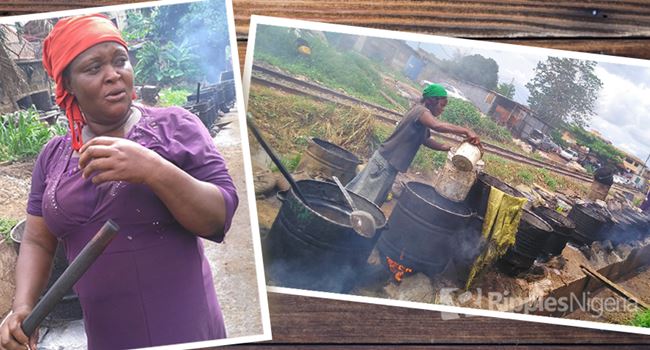 RIPPLES NIGERIA’S ARINZE CHIJIOKE was in Enugu to interact with women who risk their health, and even death to make a living by transforming palm kernels into useful products. What we found:

“The smoke does not bother me anymore because I have become used to it over the years,” Okeke says, unfazed about the risks doing this poses to her health.

The use of open fires and solid fuels for cooking is one of the world’s most pressing health and environmental problems, directly impacting close to half the world’s population and causing nearly four million premature deaths each year, according to the Global Alliance for Clean Cookstoves, a public-private partnership that seeks to promote clean and efficient household cooking solutions.

Globally, 2.9 billion people in developing countries still use traditional fuels such as firewood, charcoal, crop residues and animal dung to make their food on open fires and data from the UN on climate change shows that the smoke from cooking fires account for eight deaths every minute globally, impacting mostly women and children.

In the developing world, health problems arising from smoke inhalation, including respiratory infections, eye damage, heart and lung disease, and lung cancer are a significant cause of death in both children under five and women.

Of the over four million deaths recorded annually as a result of the use of open fires and various types of solid material used as fuel to produce energy and provide heating for cooking, 27% are due to pneumonia, 18% from stroke, 27% from ischaemic heart disease, 20% from chronic obstructive pulmonary disease (COPD) while 8% from are from lung cancer, according to the  World Health Organization.

For Okeke, it was violence that forced her family to move and start afresh elsewhere.

In 2003, the mother-of-five fled Kaduna State in Nigeria’s northwest region to the southeastern Nigerian city of Enugu following bouts of religious-influenced conflict that killed at least 3,000 people and displaced a further 63,000 people across the state.

Former Kaduna state governor, Mohammed Ahmed Makarfi had, in 2000, introduced sharia law, a move Christian citizens believed will turn Kaduna into a Muslim state. This sparked off anger and subsequently violence across the state.

“I abandoned everything and my husband even had to leave his shoemaking business,” said Okeke who, upon her family’s return to her native Enugu state, turned to processing palm kernel chaff into liquid oil and cake.

“We had to run for our lives because that was most important, and we knew we were going to find something else to do down here.”

As she speaks, her hand firmly holds a long, wooden stick which she uses to stir one of the metal drum containers that stands in front of her, beads of sweat crowding her forehead. The container, filled with kernel chaff and water, steams with smoke constantly going up and disappearing into the horizon.

Picture showing drums lined up and filled with chaff

The heat is almost unbearable, but she has to stir for hours to get the liquid product which serves as soap. What is left after the extraction of the oil, used as liquid soap, forms what is known as palm kernel cake, another by-product, which can be used as  feed for swine and fertilizer for crop production.

It sounds incredible, but it is exactly 17 years since the middle-aged woman joined the business. Everyday, except on Sundays, she comes out in the morning and visits processing plants in search of kernel chaff and when she gets the quantity she wants, she returns to her routine.

She collects water from a nearby gutter and her place of work is characterized by filth. It stinks and is bordered by palm kernel manufacturing plants on one side and a Coca Cola manufacturing company from where the dirty water flows through.

But Okeke does not care since she has to work hard to take care of the family. Her husband’s shoe-making business is floundering.

Many women, like Okeke, suffer from widespread health challenges resulting from the use of firewood. The International Centre for Energy, Environment and Development (ICEED), reports that  93,000 Nigerians die annually as a result of smoke inhaled while cooking with firewood.

Dr. Nnaji Chibueze of the Centre for Energy Research and Development at the University of Nigeria, Nsukka says that indoor pollution caused by wood fuels burnt in inefficient stoves and poorly ventilated kitchens is a major cause of respiratory diseases in women from the South East zone who also suffer from eye problems as a result of constant use of wood in poorly ventilated kitchens.

“Biomass fuel use has been found to be associated with tuberculosis, cataracts, low birth weight in babies of exposed expectant mothers and women trek up to 7-9 kilometres  to source for plenty of firewood thereby increasing their stress levels in doing other house chores”, he said.

He further explains that woodfuel that is not properly burned to carbon dioxide is diverted into products of incomplete combustion – primarily carbon monoxide, but also benzene, butadiene, formaldehyde, polyaromatic hydrocarbons and many other compounds posing health hazards.

Other experts say that smoke inhaled by women while cooking is the equivalent of smoking between three to 20 packets of cigarettes a day.

Okeke knows too well about some of these health challenges as she has battled serious body pains and spent money buying drugs from pharmacies. But her livelihood options are limited.

“Working here has taken a serious toll on my health,” she says, holding the sticks she uses to stir with one hand. “Sometimes after working here, I return home, tired and exhausted and my entire body hurts.  “When the fire is too hot, it takes more than one hour before I get what I want”, she explained as she sniffled and attempted to wipe away dripping tears with the back of her wet hand.

Picture shows liquid soap got from the chaff

Apart from the two drum containers belonging to Okeke, there are about ten more, all belonging to five different women who have also taken to the business as a means of survival. When there is less to do, they sit around and discuss their business and some of the challenges they face.

Sourcing fuel wood for domestic and commercial purposes remains a major cause of deforestation, as well as indoor and outdoor air pollution which contribute to climate change. It has also led to land degradation in the zone according to Chibueze.

Drums, bags of kernel chaff and filth that characterizes the environment

Available statistics show that the nation’s 15  million hectares of forest and woodland reserves could be depleted within the next fifty years. A 2014 study on domestic energy usage patterns of households in selected urban and rural communities of Enugu State estimates that Nigeria consumes over 50 million metric tons of fuel wood annually, a rate which exceeds aforestation efforts.

Chibueze explains that In addition to being a cheaper means of cooking food for large families especially in rural areas, old and middle age rural women are addicted to the use of fuel wood because food tastes different when cooked with something else.

He also cites the educational background of women as another factor that encourages women.  “Those with a low educational background such as primary school and lower levels tend to use more fuel wood. Most of them lack access to credit facilities which would have empowered them to seek alternative fuels for cooking” he said.

For Hope Ani, 22, the business has been a life-saver. With no job, she decided to join the business, after several consultations.  And it has been two years since she came on board. But she has no regrets at all.

She says the business is helping her support her husband who is into tailoring but hardly gets any job to do. “I came in when I was pregnant because I knew I needed a source of income to take care of my child,” she said.

Away from the challenge posed to their health,  women involved in this business complain of reduction in patronage by customers and tax-collecting government agencies.

Okeke says that since Nigeria has lost its pride of place as a world leader in palm oil production to Malaysia and Indonesia, many buyers now prefer to buy from these countries as their liquid soap is cheaper.

Ani also alleged that they face constant harassment from officials of the  Enugu State Waste Management Authority (ESWAMA) whom she says always come to collect N500 from each of them for “occupying their business environment”. Meanwhile, an official of ESWAMA said that none of its officials were directed to collect money from anybody for occupying any business environment.

The way forward for these women

Chibueze believes that a holistic policy design by the government that will improve the income and sociological status of poor households as well as access to cheaper alternative energy sources for cooking will reduce dependence on fuelwood.

“Availability of woodlots and access to alternative, affordable, renewable energy systems would reduce the pressure on the forests and the amount of time and efforts women devote to obtaining fuel wood. Provision of access to credit will help empower women to seek alternative supply of cooking fuel.” he said.

Picture shows one of the women stirring her drum of chaff

Okeke hopes daily that the government will come up with technologies that will make it easier for her to do business.

“With the right machines in place, I and other women will not have to come out in the sun everyday and  inhale the smoke coming out from this fire” she said.