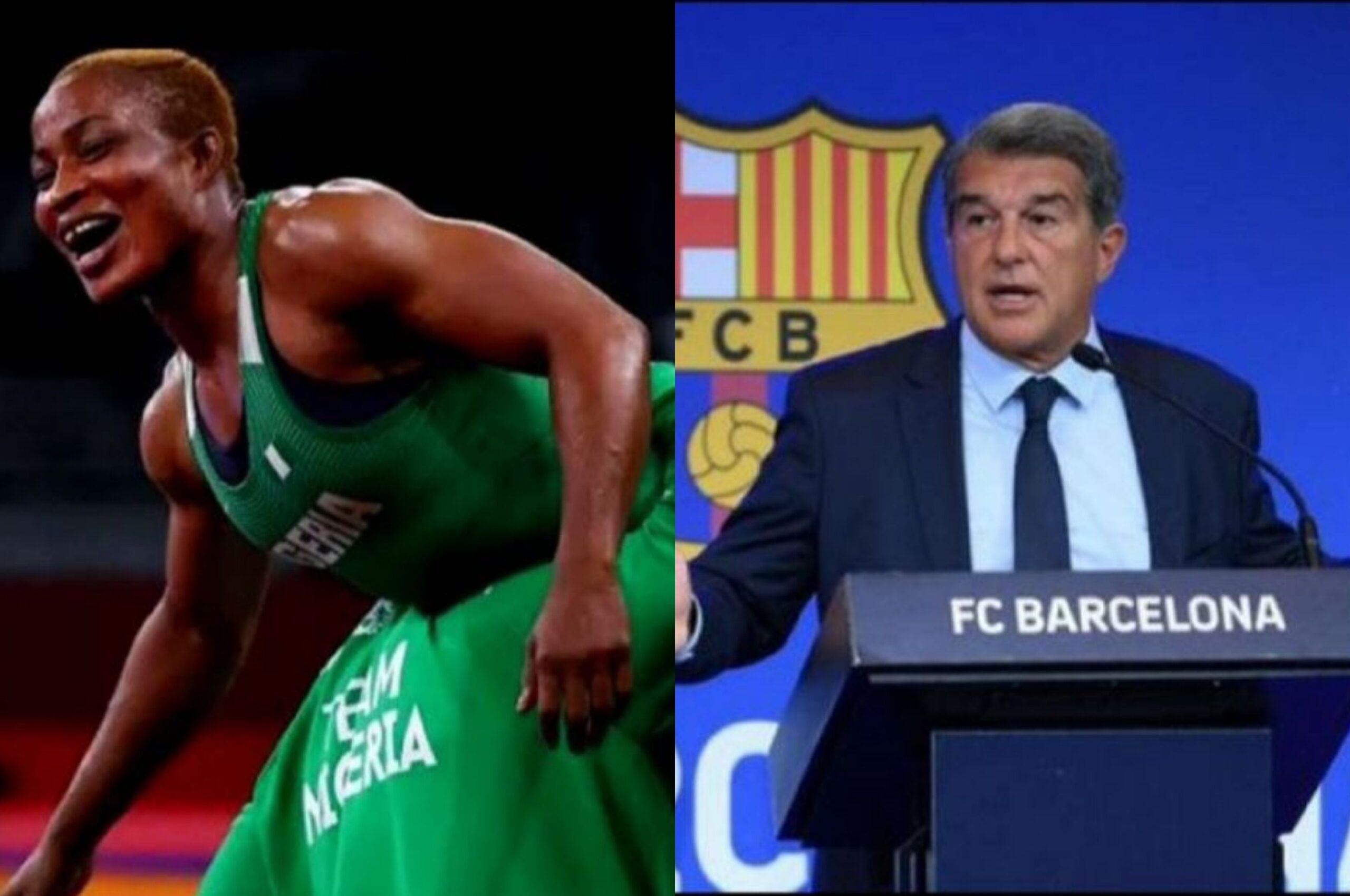 In this edition of SportsBusiness, Ripples Nigeria’s Ben Ugbana takes a look at the recent cash rewards handed to sporting heroes in Bayelsa state, including Olympic medalist Blessing Oborodudu.

He also takes a look at the current financial state of Spanish La Liga club, Barcelona, whose president recently revealed to the world that they were wallowing in a whopping 1.35bn euros (£1.15bn) debt.

The state government of Bayelsa has expressed its gratitude to the sportsmen and women from the state, who have brought glory home from their various competitions.

The Government rewarded players of victorious Bayelsa United, who emerged champions of the Nigeria Football Federation (NFF) Cup, known as the Aiteo Cup for promotion purposes.

United successfully booked a ticket to the CAF Confederation Cup following their victory.

Also on the reward list was Bayelsa Queens, the state’s women’s team, who emerged winners of the Women’s 2021 Aiteo Cup Competition by defeating FC Robo in the final match at the Samuel Ogbemudia Stadium in Benin.

Blessing Oborududu, one of the two Nigerian athletes who won medals at the just-concluded Olympics in Tokyo, was also shown some love by the government, led by Governor Douye Diri.

This is in addition to the $10,000 the wrestler received from the Nigerian government after she made a podium finish following her place in the final of the women’s 68kg wrestling.

At the ceremony, Governor Diri noted that as a former commissioner for Youth and Sports Development, he was elated by the feats achieved by both clubs in the state as well as the wrestler, who hails from Bayelsa.

Diri commended their commitment and discipline throughout the tournament, pointing out that the success was just the beginning of greatness in their career.

While advising players not to be carried away by the victory, the governor said it was time for Bayelsa players to play in the various National teams in the country, as he went on to encourage fans to support the local league and teams rather than paying attention to foreign leagues.

The financial crisis in Barcelona

Barca have been badly hit this time, and the crisis had been for a long time, despite the club being ranked as one of the highest in terms of brand value.

The situation is set to get even worse following the departure of star forward, Lionel Messi, who left the club as a result of their inability to pay his wages.

Messi, who is now a player of French club Paris Saint-Germain, announced an emotional exit from the Nou Camp last week, with financial analysts saying that Barca could suffer up to 11% decline in value.

Barca president Joan Laporta recently revealed the Spanish club was 1.35bn euros (£1.15bn) in debt, describing the situation as “very worrying” and blaming his predecessor for leaving a “terrible inheritance”.

“Our salaries represent 103% of the club’s total income, that’s 20-25% more than our competitors,” said Laporta, who is now in his second stint as president after winning March’s election.

“The first thing we had to do when we arrived was to ask for a loan of 80m euros because, otherwise, we could not pay the salaries. The previous regime (headed by Josep Maria Bartomeu) was full of lies.

“Barcelona has a negative net worth of 451m euros – it is a terrible inheritance. What has been happening is very worrying.”

In defending himself, Bartomeu claimed the financial measures he would have put in place had he not been forced to resign in October would have allowed Messi to stay at the club.

“As is known, our board of directors planned to call elections on 21 March, within the statutory period at the end of our mandate, which would have allowed us to take on and carry out the settlement of the 2020-21 season accounts,” Bartomeu said in an open letter last weekend.

“We would then have taken the decisions necessary to avoid arriving at the current financial situation.

“We would have been the only ones responsible for the closure [due to the pandemic] and its consequences, a decision that the new board has not taken throughout these past months, making clear their inaction.”

But current president Laporta has described Bartomeu’s letter as “an effort to justify management that is unjustifiable” and “an exercise in desperation.”

Ripples Nigeria had earlier reported last week’s analysis of Brand Finance, which suggested that the club was set to lose significantly more money from their brand following Messi’s exit.

It is not yet known how the club will survive the coming seasons, but it is certain that the game on the field must continue.

Courtois commits future to ‘club of his dreams’ Real Madrid