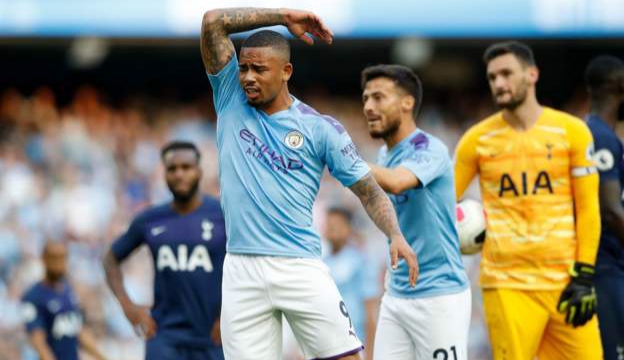 English Premier League champions, Manchester City were held to a 2-2 draw by Tottenham at the Etihad stadium on Saturday.

With only added time left, substitute Gabriel Jesus scored what could have been the winner but the goal was ruled out by the Video Assistant referee (VAR).

Leading 2-1 from the first half, City dominated but a header by substitute Lucas Moura less than 1t seconds after he came in secured a point for the visitors.

Pep Guardiola’s side are dropping points at home for the first time since December 2018.

Raheem Sterling scored the opener for the hosts when he headed in on 20 minutes.

Spurs fought back and levelled in three minutes when Erik Lamela swiftly scored from distance.

City returned on top before half time as Sergio Aguero flicked home, before Moura nodded in to snatch a point.

It was a frustrating result for Manchester City, who had begun their title defence with a 5-0 win at West Ham last weekend.

The VAR incident stirs up memories of City’s Champions League quarter-final exit at the hands of Tottenham last season.