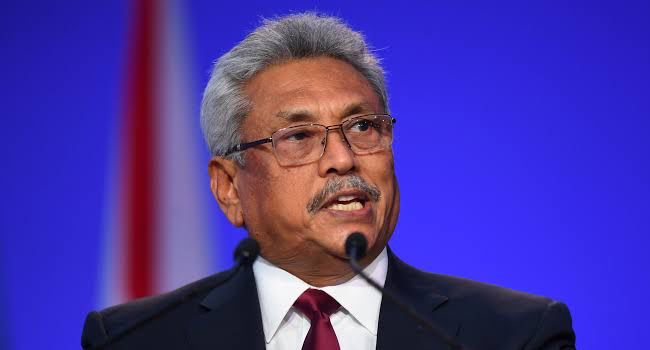 The President of Sri Lanka, Gotabaya Rajapaksa, has been forced to flee his official palace after an angry crowd of protesters demonstrating against the unprecedented economic crisis and hardship in the country stormed and overran the compound on Saturday.

The huge crowd had surrounded Rajapaksa official home to demand his resignation, blaming government mismanagement for the painful downturn and he had to accept his fate by fleeing the palace and would officially resign on July 13.

A security official was quoted as saying that “the president was escorted to safety by his military bodyguards.”

“He is still the president, he is being protected by a military unit,” he added.

Sri Lanka has suffered through months of food and fuel shortages, lengthy blackouts and galloping inflation after running out of foreign currency to import vital goods, according to media reports in the Island nation.

In the past months leading up to the ultimatum given to the president, thousands of people had poured into the capital for the demonstration.

The police had withdrawn a curfew order issued on Friday after opposition parties, rights activists and the bar association threatened to sue the police chief, which thousands of anti-government protesters had ignored and even forced railway authorities to operate trains to take them to the capital Colombo for Saturday’s rally, officials said.

Soldiers armed with assault rifles were deployed to Colombo to reinforce police guarding Rajapaksa’s official residence with authorities saying they had deployed nearly 20,000 troops and police officers for a security operation to protect the president.

Prime Minister Ranil Wickremesinghe, who would assume the presidency after Rajapaksa’s resignation, has called an urgent cabinet meeting to discuss a “swift resolution” to the political crisis, his office said in a statement.

Related Topics:PalacePresidentSri Lanka
Up Next