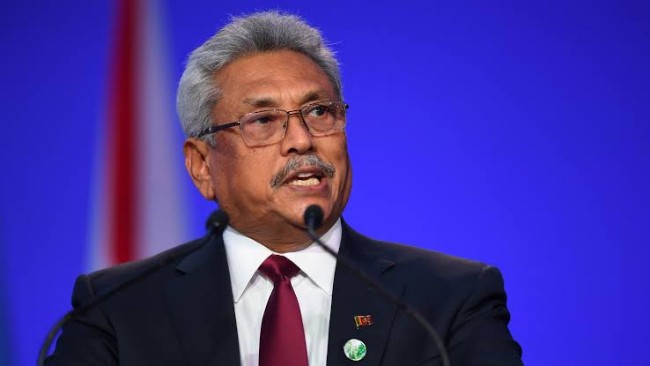 The embattled president of Sri Lanka, Gotabaya Rajapaksa, his wife and two bodyguards reportedly fled the country early Wednesday, slipping away in the middle of the night hours before he was to announce that he was resigning due to a devastating economic crisis that has triggered severe shortages of food and fuel for months.

President Rajapaksa and his entourage were said to have left the country aboard a Sri Lankan Air Force plane bound for the city of Male, the capital of the Maldives, according to an immigration official.

Rajapaksa had Saturday, agreed to resign after tens of thousands of Sri Lankans stormed the presidential palace in protest which forced him to escape from his official residence.

The president’s departure followed months of demonstrations that culminated in the angry protesters storming his home and office as well as the official residence of the prime minister, all but dismantling his family’s political dynasty, which has ruled Sri Lanka for most of the past two decades.

However, there is still no end to the crisis as protesters still stormed the presidential palace on Wednesday morning, vowing to occupy the official buildings until all the top leaders are gone.

A goverment official reported that for days, “people have flocked to the presidential palace almost as if it were a tourist attraction — swimming in the pool, marveling at the paintings and lounging on the beds piled high with pillows. At one point, they also burned the prime minister’s private home.”

The island country’s air force also confirmed that the president had fled the country, saying in a statement that it provided an aircraft for the president and his wife to travel to the Maldives with the defense ministry’s approval.

Sri Lankan lawmakers have agreed to elect a new president next week but have struggled to decide on the makeup of a new government to lift the bankrupt country out of economic and political collapse.

The new president will serve the remainder of Rajapaksa’s term, which ends in 2024, and could potentially appoint a new prime minister, who would then have to be approved by Parliament.

Related Topics:PresidentSri Lanka
Up Next