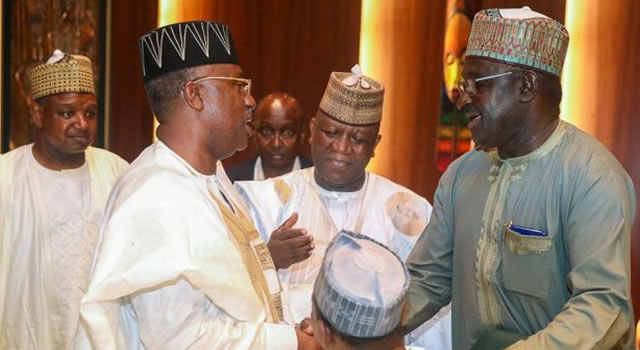 Reports emerging from Tuesday’s meeting between President Muhammadu Buhari and governors elected on the platform of the ruling All Progressives Congress (APC), point to a deadlock over the contentious  issue of elongation of the tenure of the John Odigie-Oyegun-led APC National Working Committee (NWC).

Although the governors refused to speak with State House correspondents after meeting with President Buhari on Tuesday, what reportedly transpired in the meeting has since filtered out, according to some reports.

The meeting, which held inside the Council Chamber of the Presidential Villa to resolve the divisive issue of NWC tenure elongation, lasted for over an hour.

Governors Nasir El-Rufai of Kaduna and Simon Lalong of Plateau simply said they (governors) have agreed “not to speak to the media.”

According to Premium Times, a source claimed that the governors had a heated debate over the tenure elongation of party officials.

“I am not sure what happened inside the Chamber could be called a real meeting, they were simply fighting,” the source, who declined to be named because he is not authorised to speak to the media, said.

The meeting had discussed the position of President Buhari, who asked the party to rescind its earlier decision to extend the tenure of party officials.

Buhari had said the tenure extension was undemocratic, violates the constitution and may make the party vulnerable to lawsuit.