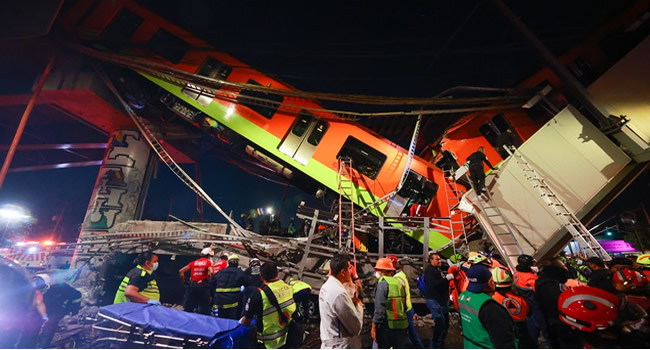 Tragedy struck in Mexico City when an overpass carrying a subway train collapsed late Monday, killing at least 23 people, including children, while 65 others were seriously injured, seven of whom are still in serious condition, Mexico City Mayor Claudia Sheinbaum said.

The train was traveling on an elevated part of the city’s rapid transit system on the newest Line 12, also known as the Golden Line, when part of the overpass collapsed onto traffic below, Mexico’s Secretariat of Risk Management and Civil Protection also reported.

Tweeting on the tragic incident from the scene, Sheinbaum said:

“Firefighters, public safety personnel are working. Various hospitals are serving. We will give more information shortly.”

Rescue efforts were temporarily suspended earlier in the night due to concerns over the stability of the subway car, which was still dangling over the road.

BREAKING… Bill and Melinda Gates to separate after 27yrs in marriage