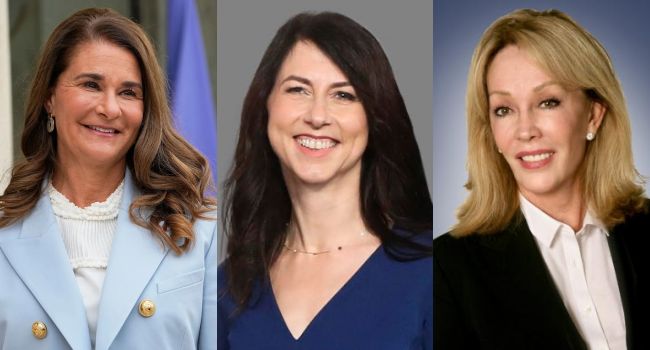 There are several ways one could join a 6-digit club or become a billionaire; you can either choose the corporate world, pour your money in investable assets, or betterstill, settle for the divorce route if you are a lady.

Divorce has made many women millionaires, and has also put some on the billionaires’ watchlist. While they first married for love, this affair becomes financially beneficial when irreconcilable differences come knocking at their matrimonial homes.

However, while the ladies mentioned below might have become billionaires after their divorce, they were able to earn that much from separation due to their significant contributions in different ways to their ex-husband’s businesses.

This was one of the most shocking divorce cases, as Bill and Melinda Gates were the poster face of everlasting marriage. After 27-years of being a power couple, they both said they could no longer grow together as such.

Some of the financial details of their divorce were not made public, but according to some reports, it is believed that Melinda is supposed to receive $76 billion due to equal settlement last year.

However, the figure made public is the stock transfer from Gates to Melinda in May 2021, worth $2.4 billion, as part of their divorce settlement.

Melinda is currently worth $6.1 billion.

MacKenzie made her way into the billionaire list after her divorce from Jeff Bezos, the founder of Amazon, in 2019. They were married for 26 years before the third richest man in the world decided to shop from another store.

She received $35 billion worth of Amazon stock, which is 4% of the company. It is currently the largest divorce settlement in the world, making her the third richest woman in the world.

MacKenzie is currently worth $36.7 billion.

After 32 years of marriage, Sue and her husband, Bill Gross, cofounder of PIMCO, an investment firm, decided to go their separate ways – leading to one of the most expensive divorce cases.

Sue walked away from the marriage with about $1.3 billion, a house worth $36 million and half of their art collection, one of which is a Picasso, that she sold for $35 million.

Sue is currently worth $1.6 billion

She got married to Harold Hamm, an oil baron, in 1988, but the marriage hit the rock in 2014. Sue Ann left the marriage with a pay check of over a billion dollars after a court battle.

Her husband had initially paid her $20 million, but topped it up with a cheque of $974 million, which Sue Ann surprisingly described as too small, and went to court in order to get more out of Hamm.

But she lost the case. After the 26-years marriage ended, the judge that presided the case was removed, as Sue Ann, according to report, funded a political action committee which led to the judge’s ouster.

Her story ended with a different twist, as Elaine went from being a minority shareholder to the largest individual shareholder after what was described as a ugly battle.

Elaine divorced her husband, Steve, TWICE, yes, you read right; as in two times, and the second was the last, which saw her leave the union with 11 million shares, valued at $795 million in 2010, the year of the final divorce.

The shares were from Steve’s high end hotel and casino developer company, Wynn Resorts, of which Elaine was a board member. Her husband also sold shares worth $114 million, with most handed to Elaine.

She was later kicked out of the board after suing the company in a bid to sell some stake. In 2018, when her husband resigned amid sexual harassment, which he denied, he sold his remaining shares.

This made Elaine the single majority shareholder in Wynn. She is currently worth $1.7 billion.

Notable mention: Patricia Disney: $600 million
Patricia had the longest marriage out of the billionaire divorcees, as she untied the knot after 52 years of marriage to Roy E. Disney, the son of Roy Disney, the cofounder of the famous Walt Disney.

One astonishing thing about the divorce was that it came at their old age, Roy at 77, and Patricia at 72. She bid the marriage goodbye with half of Roy’s $1.3 billion fortune.