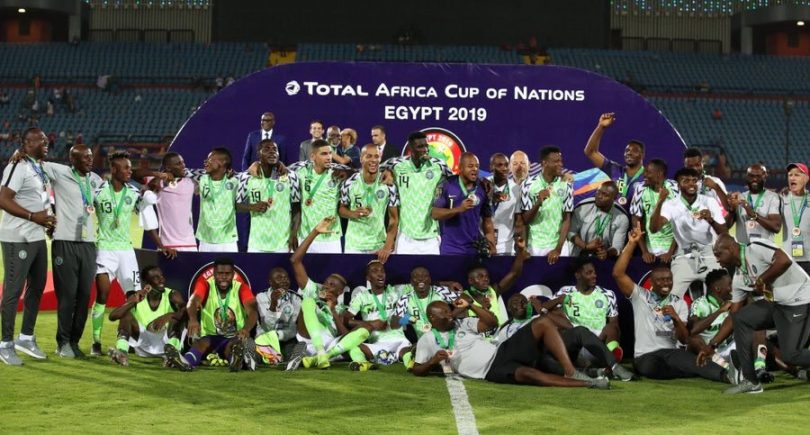 The Super Eagles of Nigeria defeated the Carthage Eagles of Tunisia in the third place playoff of the 2019 Africa Cup of Nations (AFCON).

An early goal by Odion Ighalo was enough to secure victory for Nigeria, who now extend their unbeaten run in the bronze matches of the continental tournament.

Ighalo scored in the 3rd minute from a defensive error by the Tunis, but was taken off before halftime due to an injury.

The China-based player’s 5 goals in the tournament could earn him the Golden Boot award.

The Wednesday’s victory in Cairo means the Eagles have never lost a third place match in the history of the tournament.

Francis Uzoho and Samuel Kalu made their AFCON debuts in the game, with the goalkeeper making the starting lineup in place of Daniel Akpeyi while forward Kalu played as a late substitute for Samuel Chukwueze.

Ola Aina, who played in place of suspended Chidozie Awaziem, was involved in the only goal of the game.

The Italy-based defender accelerated down the left and delivered a low cross into the area but the Tunisian goalkeeper spilled the ball and it eluded his defender for Ighalo to poke home.

Ighalo was replaced by Victor Osimhen in the second half, Osimhen also making his debut in the tournament.

Udinese defender, Williams Troost-Ekong was named Man of the Match after putting up a solid performance in the match, forcing Tunisia to stay goalless.

Nigeria finished third in the 2019 AFCON.

The winners and runners-up will be determined on Friday when the Terenga Lions of Senegal will face their Algerian counterparts in the final in Cairo.