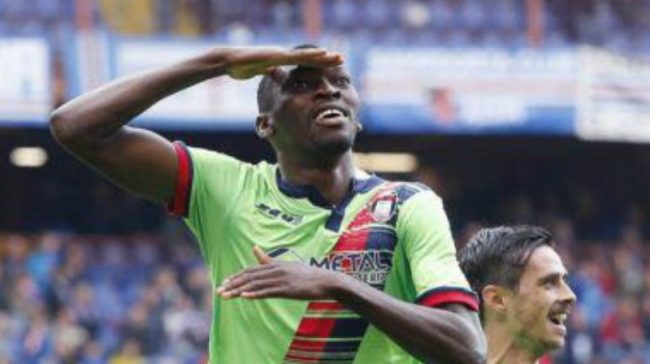 Latest invitee to the Super Eagles’ camp, Simeon Simy Nwankwo has expressed joy over his invitation to the national team, admitting it is an opportunity for him to prove himself to the coaches in charge of the team.

The Serie A forward, who plays for Crotone, was included in a 30-man provisional World Cup list by coach Gernot Rohr on Monday.

He is faced with a great task of proving himself against eight other forwards in Rohr’s list, including Odion Ighalo, Junior Lokosa, Kelechi Iheanacho, Ahmed Musa.

Speaking to Brila FM in Lagos on Wednesday, the 26-year old, who scored seven goals in 22 league appearances for his club this season, said: “The last few days have been a good one for me, my club and family.

“I have received a lot of congratulatory messages on the invitation and I’m happy with the way things have turned out for me so far.

“Playing at the World Cup is the dream of every player. This is an opportunity for me to showcase my talent and prove myself to the coaches.”

As final preparations for the World Cup finals in Russia, the Nigerian team are scheduled to play a farewell friendly game against DR Congo in Port Harcourt, before traveling to Wembley to face England and then to Austria to play Czech Republic.

The individual performance of the players as they camp ahead of these friendlies will go a long way to determine those that will make up the final 23-man team of Gernot Rohr.

Simy added: “Already, we have some friendly matches lined up before the World Cup which is a big opportunity for every player to fight for a place in the team, especially those of us coming into the team for the first time

“I will give my best and see what happens at the end of the day.”

The Super Eagles have been drawn in World Cup Group D alongside Argentina, Croatia and Iceland.