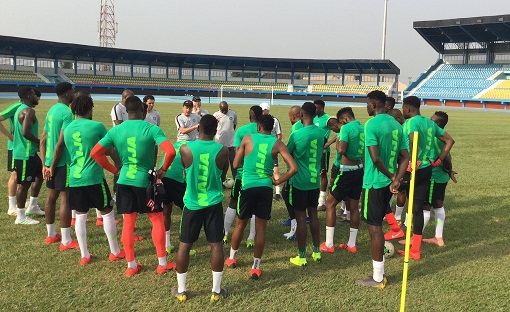 Nigeria’s Super Eagles will take on the Indomitable Lions of Cameroon in the round of 16 of the ongoing Africa Cup of Nations (AFCON).

Defending champions finished in second position in Group F with five points behind the Black Stars of Ghana.

The Clarence Seedorf men were held to a goalless draw by the Squirrels of Benin in their final Ggroup match at the Suez Stadium on Tuesday.

The Black Stars on the other hand defeated Guinea-Bissau 2-0 and finished top of the group.

The Super Eagles also finished in second position in Group B behind the Barea of Madagascar.

While Cameroon recorded one win and two draws from their three group games, Nigeria picked up two wins and a defeat.

Both sides, who last met on the Qualifiers of the Russia 2018 World Cup, will battle in the second round.

The game will see both teams rekindle their rivalry in the competition with the winner guaranteed a place in the quarter-finals.