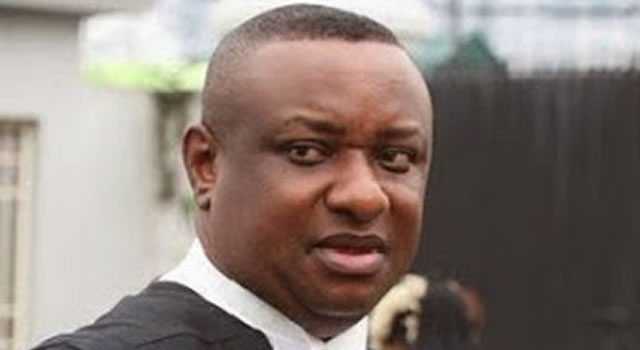 Keyamo had come under severe criticism by some people for accepting the new role, with some mentioning that he had failed his late mentor. But Keyamo argued that even the late rights crusader was also a Buhari supporter, citing his backing of Buhari’s military regime against popular stance of other lawyers, as well as his support of Buhari’s presidential bid in 2007.

He also said that he accepted to serve as the official spokesperson for Buhari’s reelection campaign “for the good of the country and for posterity.”

In a statement on Wednesday, Keyamo said Buhari represents the values he cherishes, especially around anti-corruption.

He said Buhari’s present government, unlike any other preceding it in the country, has recovered so much looted funds.

“I can boldly say that no government in the history of Nigeria has recovered so much looted funds as that of President Muhammadu Buhari. The fact that this government has clearly chosen this path in protecting the masses of our country (as unpleasant as it has been to some) is one of the many reasons why I am so proud and bold about my support for the re-election bid of President Muhammadu Buhari,” he said.

Keyamo said he was inspired by the late Fawehinmi who, the only government he supported throughout his lifetime, was that led by the then General Muhammdu Buhari from 1984 to 1985 “to the chagrin of some of his professional colleagues.”

He said Fawehinmi saw what his colleagues could not see at that time, “because after Mr Buhari was overthrown, Nigeria witnessed its worst era in terms of institutionalising corruption and political deception.”

In the 2007 presidential elections, Keyamo, said Fawehinmi again endorsed Buhari, thus: “When we talk of anti-corruption war, there is no way you will exclude General Buhari.

According to Keyamo, some of the same forces and interests that ousted Buhari in 1985 are still very much around as their voices have gotten louder of late.

“They want us to go back to our old ways, disguised as if they genuinely care for the masses of this country. When you look at the profile and ignoble antecedents of these characters – the emergency heroes, some of us have no option but to undertake this role we have been called upon to assume just to ensure that they do not succeed in their selfish enterprise,” he said.

He restated that his convictions about the assignment are deep and well-thought out as Nigeria was currently at a critical crossroads in its history.

“For all I have said above, my convictions about this job are deep and well-thought-out. Given my background, it is clear that I cannot be a sycophantic rabble-rouser (troublemaker), looking for some personal gains.

“Having reached the top echelon of my career, some of us can conveniently stay away from all these, and continue to earn a good living from our thriving law practice.

“However, the call of duty beckons because we are at a critical crossroads in our history where one wrong turn may take us back to the sorry state from which we are emerging. We are here to convince and appeal to the masses not to allow us take that wrong turn” he said.

With regards to questions around Buhari’s age and health, Keyamo said it would be ungodly and outrageous for a mere mortal to assume the status of God Almighty to speculate on the longevity or strength of any human being.

He said it is a matter entirely in the hands of God as even doctors have been proven wrong on many occasions.

On age, he said no one can argue that age has anything to do with the required integrity to be the president of a country.

Speaking on the ruling All Progressives Congress (APC), he said people can easily point to those with questionable past in the APC and that in his true conscience, he cannot defend them or make excuses for them.

However, “in joining the president’s party, they are subjecting themselves to the disciplined leadership of the president,” he said.

“Nigerians know from where their problems came. They know it is not President Buhari. They know it came from some of those battling tooth and nail to displace him. Those who are persuaded like us should not remain aloof, please. Kindly join us in this journey,” he said.