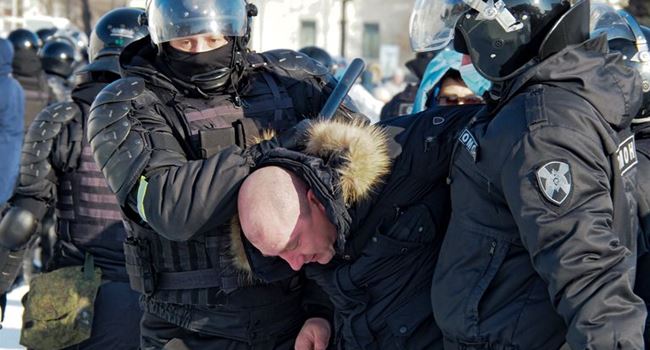 Scores of supporters of jailed Kremlin critic, Alexey Navalny clashed with police in Russia on Saturday over the continued detention of the opposition leader who recently arrived from Germany.

Reports say scuffles broke out early today as Navalny’s supporters gathered in Khabarovsk despite elaborate measures by the government to curb demonstrations planned in more than 60 Russian cities.

In a post on Instagram, Navalny’s wife Yulia said she would join the protest in Moscow. “For myself, for him, for our children, for the values and the ideals that we share,” she said.

However, the city’s Mayor Sergei Sobyanin said the call for rallies were “unacceptable” during a pandemic, and warned police would take action to ensure public order.

Navalny was arrested last week by local police on his arrival at a Moscow airport after he flew into the country from Germany where he was receiving treatment for poisoning.

He is expected to be jailed for three and a half years for allegedly flouting the terms of a suspended prison sentence – a move which is likely to set off a wave of Western criticism against President Vladimir Putin.

Moscow’s prison service (FSIN) in a statement said that Navalny was detained due to the alleged violations of his suspended prison sentence and would be held in custody until a court hearing later this month.

‘Don’t depend on governors to defend you, rise to the occasion’ —Nnamdi Kanu tells South-West youths