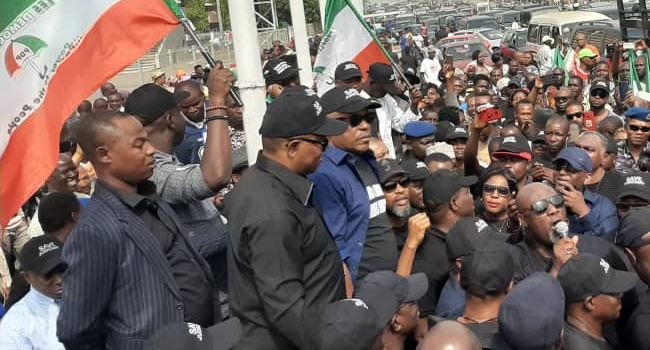 Reports say the hoodlums struck immediately after the PDP National Chairman, Prince Uche Secondus, delivered a speech to party members who trooped out in their numbers in protest of the alleged miscarriage of Justice perpetrated by the Supreme Court.

No sooner had the PDP speech ended than scores of hoodlums trooped out from unknown places, carrying banners in the name of supporters of the ruling All Progressives Congress, APC.

They chanted anti-PDP songs which instilled the phobia of possible violence and mayhem and consequently scared and dispersed passers-by close to the protest ground.

Part of their placards reads, “The PDP wanted to buy judgment but they failed and resorted to anarchy”.

In his message while addressing party faithful’s, supporters and sympathisers, before the disruption by the hoodlums, the PDP National Chairman said that he believes that the needful will be done when people in position hear the cry of the party to revisit, review and reverse the judgment.

He said; “It is a Justice not only to the people of Imo but Nigerians as a whole.

“This is the time to show courage. The Executive arm of government should stop interfering with the judiciary in its bid to deliver judgment.

“Police, DSS should stop interfering and preventing protesters from carrying out legitimate democratic practices and protest.

“What we want to correct is the ‘judicial malaria’ that took place last week.

“Protest obtains in all democratic environments all over the world,” Secondus added.