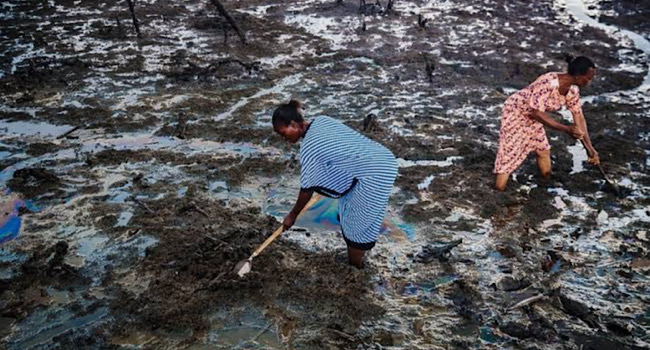 Data from the National Oil Spill Detection and Response Agency (NOSDRA) indicate that oil spills and pollution occur In the Niger Delta area due to sabotage by oil thieves, pipeline vandals, equipment failure, and operational accidents.

The data further showed that some 1,000 incidents of spillage were reported on a monthly basis from oil facilities across Bayelsa State alone.

During a media briefing on Sunday, February 28, Mr. Idris Musa, Director-General of NOSDRA decried the high rate of spills in the state.

Musa made this statement in the aftermath of a recent oil spill incident from an offshore facility in Bayelsa where several operators denied responsibility.

According to Musa, the effect on the environment and ecology could sometimes take decades to remediate.

He said that the agency had consistently sensitised the oil communities on the inherent dangers.

“The rate of oil spills in Bayelsa is a cause of worry and we should ask ourselves if this type of things happens in other countries that produce crude.

“The oil fields in the entire Southern Ijaw swamps are very notorious for pipeline vandalism by oil thieves who steal crude for local refining and in the process pollute the environment.

“It is a very big challenge to our resources as regulators and each incident has to be investigated as a majority of the spills are caused by vandals,’’ Musa said.

Also, NOSDRA and some environmentalists expressed concern over the alleged environmental impact of Conoil Producing Limited’s operations in Bayelsa.

The concern was raised over the firm’s alleged insensitivity to the sustenance of the environment where it operated.

It was also raised over its alleged continued failure to appropriately respond to an undersea leak in its oil field pipeline in the state, since Sept. 3, 2020.

Ripples Nigeria gathered that NOSDRA’s  Director-General, Musa, who confirmed the incident on Dec. 2, 2020, alleged that the company had operated in breach of regulatory guidelines.

Musa had alleged that the oil firm had the habit of causing avoidable spills and had previously been sanctioned for degrading the environment.

“This oil company has been spilling oil for a period of time now, from our findings, it is from an underwater pipeline under pressure creating bubbles on the water surface.

All the directives given to it to contain the oil spill, shut down, and replace the leaking pipeline, near the shore in Sangana, Bayelsa, fell on deaf ears.

“The agency sanctioned the company for this untoward act, but nothing has changed. The leakage continues and the oil company behaves irresponsibly even though it is a Nigerian oil firm,” he alleged.

When Buhari asked Jonathan to resign, no one arrested him — Falana