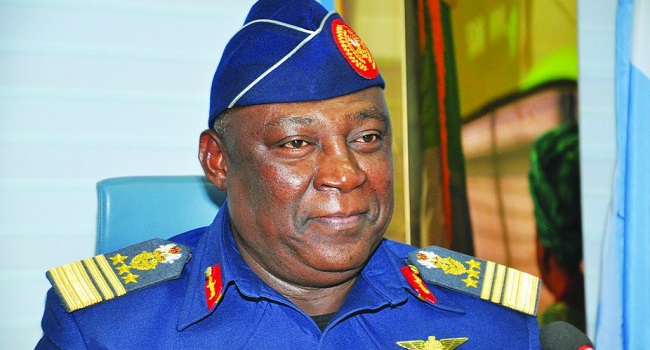 A suspect in the murder of former Chief of Defence Staff, Air Chief Marshall Alex Badeh, Aliyu Usman, has narrated how he and his gang killed him.

The suspect, who insisted that his gang did not know Badeh was a military officer, said they thought he was a wealthy man from whom they could make money if attacked.

Usman made the confession when he and 14 others were paraded by the Joint Investigative Panel into the murder of the former defence Chief on Wednesday at the Mogadishu Cantonment, Abuja.

The Joint Investigative Panel comprises of Representatives of the Defence Headquarters, the police and the Department of State Services, DSS.
The suspects include a 51-year-old Jibrin Ibrahim, Aliyu Usman, Shuaibu Rabo, Yahaya Nuhu, Musa Muhammed and Ibrahim Abdullahi.

The suspects, who confessed to the killing, also revealed that they collected N2m ransom before releasing Badeh’s friend, Joseph Okpetu, who was in the same vehicle with him. He was abducted after the killing of the the former defence chief.

The suspects were arrested by the joint panel, which was set up by the Chief of Defence Staff, Gen. Abayomi Olonisakin, and coordinated from the Defence Headquarters, Abuja.

It would be recalled that the police had in December 2018 paraded five suspects for Badeh’s murder, including Rabo.

The five earlier paraded suspects were among the 15 paraded by the joint panel on Wednesday.

Speaking with journalists during the parade, the gang leader, Usman, also known as Chiroma, confessed that seven of them attacked Badeh, whom they assumed to be a wealthy man and not a retired military officer.

He said: “It was a Friday and I came to the Gitata Market; I was the one who brought the job to the gang. I am a taxi driver. So, while I was driving to Panda village, in Nasarawa State, one Alhaji Maube Gani told me that there was one wealthy man, who owned a farm in that area and that we could make money from him. I told him I had never attacked any person in my life, but he said I should not worry.

“Then later on December 18, I drove my car out and Alhaji called me that the man had come to his farm as usual and that we should come to attack him. So, I called the other members and we met Alhaji in the Gitata area.

“At that stage of the operation, I did not know Badeh’s identity; none of us knew that the man was a military officer. There were seven of us, who participated in the operation. We just got to the road, shot the man and took away his friend.”

Speaking during the parade of the suspects, the Chairman of the Joint Investigation Committee, Maj. Gen. Bamidele Shafa, said 20 suspects had been identified, out of whom 15 had been arrested, noting that efforts were being intensified to apprehend the other members of the syndicate.

Shafa said: “After thorough investigation, the panel made the following findings; one, the attack and killing of ACM Alex Badeh was criminal and did not have any political undertone. Two, 20 persons were involved in the crime, out of which 15 have been arrested.

“The suspects in custody confessed to their direct involvement in the crime. They employed automatic weapons and locally-made guns in the killing of the air chief marshal. This was buttressed by the result of the autopsy and weapons recovered from the residences of the suspects.

“The suspects will be handed over to the appropriate agency for investigation and prosecution.”

Badeh was the CDS between January 2014 and July 2015, after serving earlier as the Chief of Air Staff between October 2012 and January 2014.