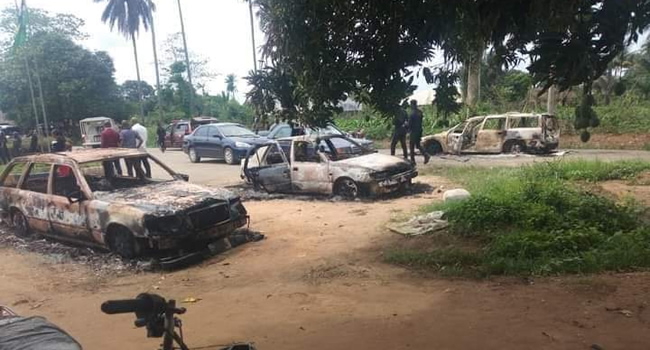 Attackers suspected to be operatives of the Eastern Security Network (ESN), the military wing of the proscribed Indigenous People of Biafra (IPOB), have attacked a police formation in Ikono local government area of Akwa Ibom State, killing two police officers and burning down the station in the process

The incident which happened in the early hours of Sunday, saw the attackers razing down the station located at Ibiaku Ntok Okpo, the local government headquarters which shares a close border with some parts of Abia State.

A statement issued by the Chairman of the local government, Hon. Nyakno Okoibu, signed by his Chief Press Secretary, Nsisong Ubong Ntuk, and made available to Ripples Nigeria, stated that the attack took place at about 3am which led to the killing of the officers, burning down the station and a number of police vehicles parked in the premises of the station.

“Today, Sunday, 2nd May, 2021, the Executive Chairman of Ikono Local Government Area, Hon. Nyakno Okoibu, received a distress call about the invasion of the Police Station at Ibiaku Ntok Okpo by criminals alleged to be members of the Eastern Security Network (ESN) by 3am.

“In the ensuing melee, two police officers were killed, five vehicles burnt, and a police woman on night duty was critically injured, while the flag hoisted at the police station stolen and destructive acts carried out by the invaders.

“On getting the alarming information, Hon. Nyakno Okoibu in line with his pragmatic approach towards governance and as the Chief Security Officer of the local government area, swung into action by arriving at the scene of the mayhem with his retinue of aides.

“On getting to the location, it was discovered, to the chagrin of the council boss that the report was true.

“However, as a proactive administrator, the Chairman has been taking overeaching measures to ensure that normalcy is restored to the area of attack and other parts of the local government area.

“The Executive Chairman wants to inform the people of Ikono local government area and the state at large to stay calm as he is assiduously working with relevant security agencies to ensure that the situation is contained and necessary measures are being put in place to forestall a reoccurrence.

“Already, efforts are being made to bolster the security architecture within the perimeters of Ikono.

“All indigenes of the local government area are assured of going about their normal routine without fear of attacks, harassment and intimidation as the Chairman is on top of the situation and will communicate the next line of action after interacting with the Executive Governor of the State, Deacon Udom Emmanuel.

“All indigenes of Ikono local government area are encouraged to up their security antenna and report any suspicious activity to security agents.

“Also, anyone with useful information on the attack should come forward as there is the assurance of strict confidentiality.

“There is no cause for alarm, this ill wind will be decimated with utmost precision.”