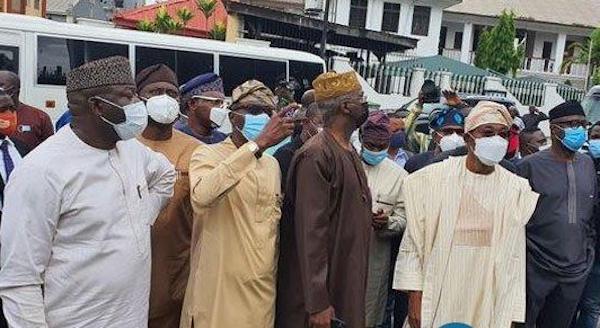 Governors of the South-West states and some ministers paid Governor Babajide Sanwo-Olu of Lagos State a condolence visit on Sunday, to sympathise with him on the violence that occured in the state in the aftermath of the shooting of the #ENDSARS protesters at the Lekki Toll Plaza on Tuesday.

Several private and public buildings were touched by hoodlums, who went on rampage in different parts of the state.

The governors and ministers, according to updates by Sanwo-Olu’s Chief Press Secretary, Gboyega Akosile, Governor Sanwo-Olu met with the visitors at the Government House in Marina.

The governors, which included Governor Rotimi Akeredolu of Ondo, Governor Kayode Fayemi of Ekiti, and Governor Seyi Makinde of Oyo state, said the coordinated attacks in Lagos was an attempt to weaken the economy of the South-West geopolitical zone.