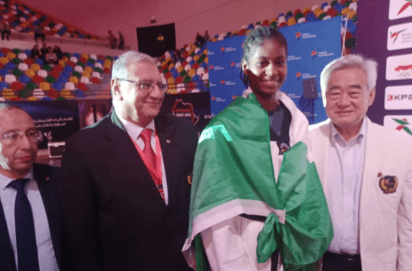 Nigeria will be represented by Elizabeth Anyanacho in the Taekwondo event of the 2020 Tokyo Olympic Games as she picked up qualification over the weekend.

The Tokyo Games will be her first ever Olympics.

She secured the ticket on the opening day of the African qualification tournament on Saturday in Rabat Morocco.

The result makes Anayanacho the first female to qualify for the Taekwondo event of the Olympics in 16 years, and the second ever female after Princess Dudu’s qualification for the Athens 2004 Olympics.

But Okuomose won the bronze match and will be on stand-by in case of any doping infractions by the eventual finalists.

At the pre-tournament head of team meeting, organizers confirmed that only finalists will clinch the Olympic tickets to Tokyo, and finals matches would not be held given the non-significance.

Nwosu, who is number two seed in the tournament, only needs to win two crucial matches to qualify for the Tokyo 2020 Olympics.

Ajayi, the tournament’s number five seed and 2019 Nigeria Open gold medalist, will meet Madagascar’s Steve Rakotobe in the round of 16, whom he needs to defeat before meeting the winner between Benin Republic’s Jehudiel Kiki and Sierra Leone’s Suliaman Suwaiabu.