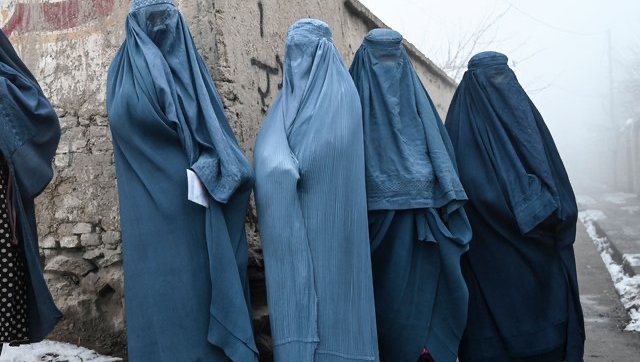 Afghanistan’s Taliban rulers on Saturday, May 7 have ordered all Afghan women to henceforth wear burka clothing in public.

Specifically, the blue burka became a global symbol of the Taliban’s previous regime in Afghanistan from 1996 until 2001, and the decision to make it mandatory again marks an escalation of growing restrictions on women in public.

The Ministry for the Propagation of Virtue and the Prevention of Vice read a decree from the sect’s supreme leader Hibatullah Akhundzada at a press conference in Kabul.

“We want our sisters to live with dignity and safety,” said Khalid Hanafi, acting minister for the all-male ministry – which replaced the country’s women’s ministry after the militants took control in August 2021.

The decree says that if a woman does not cover her face outside the home, her father or closest male relative would be visited and eventually imprisoned or fired from government jobs.

It also states that if women have no important work to be done outside, it is better for them to stay at home.

“Islamic principles and Islamic ideology are more important to us than anything else,” Mr. Hanafi said.

The decree adds that the ideal face covering is the blue burka, which shows only the eyes.

Shir Mohammad, an official from the vice and virtue ministry, said: “For all dignified Afghan women wearing hijab is necessary and the best Hijab is chadori (the head-to-toe burka) which is part of our tradition and is respectful.

“Those women who are not too old or young must cover their face, except the eyes.”

Most women in Afghanistan wear a headscarf for religious reasons, but many in urban areas such as Kabul do not cover their faces.

The Taliban previously decided against reopening schools to girls above grade six (around 11 years old), going back on an earlier promise.

The international community has urged its leaders to reconsider.

Prior to their takeover in 2021, the Taliban last ruled Afghanistan from 1996 until the US-led invasion in 2001, and banned female education and employment.

After the regime was toppled, girls and women were allowed to return to school and work, and the international community had made the education of girls a key demand for any future recognition of the Taliban administration.