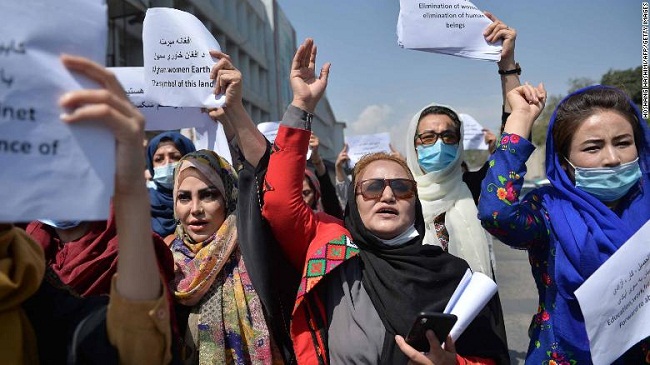 The Taliban has reportedly detained several women who participated in a protest near the presidential palace in Kabul on Tuesday.

An anti-Pakistan rally took place in the Afghan capital.

Many people were injured during the rally after the Taliban opened fire on protesters.

In addition, the Taliban also seized cameras from journalists when they started dispersing crowds.

Hundreds of Afghans took to the streets of Kabul on Tuesday, demanding that Pakistan stops interfering in Afghanistan’s affairs.

The protests took place in at least two locations in the city centre, with participants chanting slogans against Pakistani meddling in the country.

Many Afghans, including former officials, said Pakistan was supporting the Taliban and has helped them in their recent military campaign, during which the militants group took over the country.

Islamabad has denied any involvement.

In one of the many videos of the protests circulating on social media or on local TV, a female participant said she and the other protesters are not there for personal gains, but to defend their country.

“We are here to defend our country. Pakistan has started a direct invasion in Afghanistan and we are asking why its chief intelligence is here? What is his purpose?”