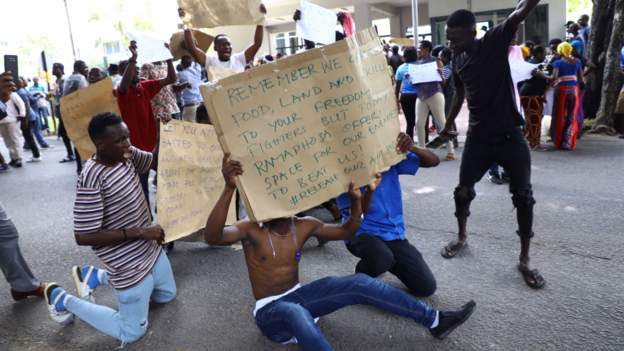 Reports say hundreds of protesters rallied outside South Africa’s High Commission in the country’s capital chanting in Swahili: “We want our plane back.”

One protester carried a placard reading: “Remember we offered food, land and skills to your freedom fighters but today [President Cyril] Ramaphosa offers space for our enemies to beat us! Release our Air Bus.”

The protests however turned awry as police later dispersed the protesters with Dar er Salaam’s chief of police informing that his officers had arrested some of the protest’s ringleaders.

Last Friday, the Air Tanzania Airbus 220-3 was impounded by the South African authorities following an order from the High Court in Johannesburg.

A retired farmer said it was because Tanzania’s government had not paid him $33m (£28.8m) it owed in compensation after his farm was nationalised in the 1980s.