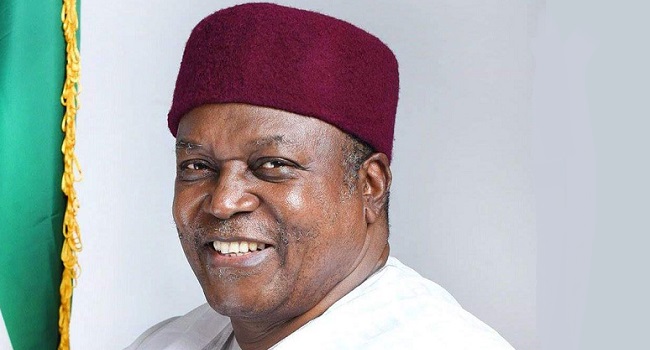 Taraba State Governor Darius Ishaku on Saturday, April 23 ordered security agents in the state to immediately implement operation stop and search across the state, particularly in Jalingo, the state capital.

The order comes four days after two explosions were reported in the state.

The most recent explosion occurred on Friday, April 22 in the Nukkai Market district of Jalingo city in Taraba.

ISWAP, a terrorist organization, has claimed responsibility for the attack that killed at least six people on Tuesday.

“Governor Ishaku described the incident as ungodly, inhuman, barbaric; and a deliberate attempt by evil people to destabilize the state,” a statement signed by his spokesperson, Iliya Bekyu Akweh, said.

“He directed Security Agencies in the state to network through proper investigation; to fish out the terrorists whom he said are working relentlessly to destabilize the peace of the state

“The Governor further directed Security Agencies to immediately introduce operation stop, and search across the state especially in the State Capital to checkmate the nefarious activities of terrorists and their cohorts who have infiltrated the state recently

“According to the Governor, it is disheartening for lives of innocent citizens and their properties to be destroyed; without any act of provocation by criminals who do not have an iota of regard for the sanctity of human lives; and assured that no stone will be left unturned to unravel the mystery surrounding their heinous and dastardly act

“The Governor however advised people of the state to be vigilant, and report any suspicious persons in their midst to Security Agents for immediate action; with a view to averting a recurrence of the ugly incident.

“Ishaku particularly implored the people of the state to avoid public places such as recreational centers and other crowded areas which are possible soft targets of the terrorists, emphasizing that Taraba State needs peace to develop and not bombers to destabilize Taraba state.

“Ishaku further assured the people of the state of his administration’s readiness to rid the state of criminality, and advised them to go about their lawful duties stressing that the government was on top of the situation.”