TATTOO CRAZE: Why is everyone getting inked to honour celebrities? | Ripples Nigeria 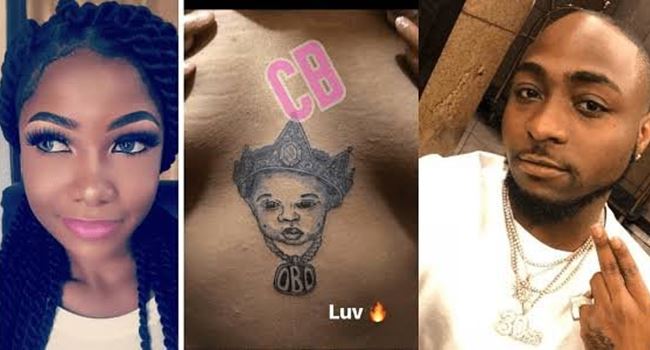 The tattoo craze is currently trending in the Nigerian pop culture sphere. Staunch lovers of socialites are getting inked for numerous reasons.

In recent weeks, fans of various Nigerian celebrities have taken to social media to flaunt the star that they represent and admire.

This act revealed the level of influence most socialites have on Nigerian youths. While getting tattooed is as old as time itself, inking the name, or face of a celebrity is an odd practice in this part of the world.

Until recently, Nigeria a predominantly religious and moralistic nation frowned against tattoos. It was seen as an absurd practise that should only be affiliated with hooligans, hoodlums and vagabonds.

The status quo began to change gradually in the late 2000s, and early 2010s following the emergence of movie stars, artistes and other influencers who are art enthusiasts. Of course, this is a direct effect of cultural imperialism.

The exposure to western culture and lifestyle agitated Nigerians to style up like those they see in the mainstream media. Tattoos, piercings and other fashionable elements all became part of the swagger.

As time went on, stars like Wizkid, Davido, Burna Boy, Tonto Dikeh, Sean Tizlzle, etc. became ambassadors for tattoos in this part of the world. They made a statement with their bodies that getting a tattoo is hip, cool and ostentatious.

Though tattoos are still largely frowned upon in Nigeria, the younger demographic set is accepting the culture with open arms. Their favourite celebrities embody it, hence, why shouldn’t they?

Recently, it has become apparent that Millennials, Gen Z and the younger generation are lovers and advocates of tattoos.

There is a surge in the number of fans who are paying tribute to their favourite celebrities by getting inked.

Amid the recent trend of people inking tattoo of celebrities, a lady has also joined the train as she inked the image of Nollywood actress, Regina Daniels on her skin.

The lady who seems to be an ardent fan of the Nollywood star, said that she did not do it to attract some favors from the actress, rather, she did it to express her undying love for her.

In a post that accompanied the photos and video of the tattoo, she said:

“I love you @regina.daniels, this is my way of saying I love you, your love has broke up my principles you’re the fist image I have place on my skin, I never had extra money to put your red dress so forgive me, I didn’t do this to gain favor but just to tell you that there’s someone that heart you alot”

A former Big Brother Naija housemate, Ka3na recently chided a fan who said she inked the star’s face on her body. Ka3na was not down with that, and she expressed her displeasure over what the fan did.

Funnily, Ka3na’s was called out by a number of other celebrities, who felt she acted ‘ungratefully’ towards the fan, but Ka3na would have non of that as she stood her grounds and insisted that tattooing the picture of name of idol on one’s body was not the way to go.

Nigerian youths may not necessarily understand the ideology behind tattoos but they enjoy the attention it brings their way.

Other celebrities who have had their names written, or pictures tattooed by fans include- Kizz Daniel, Bobrisky, Big Brother Naija’s Ka3na, Blessing Nkechi, to name a few.

In the coming years, it may become an epidemic, hence, parents should prepare themselves for the war against tattoos in the near future.

NPA, Lagos govt to commence e-call up system for trucks from Feb 27