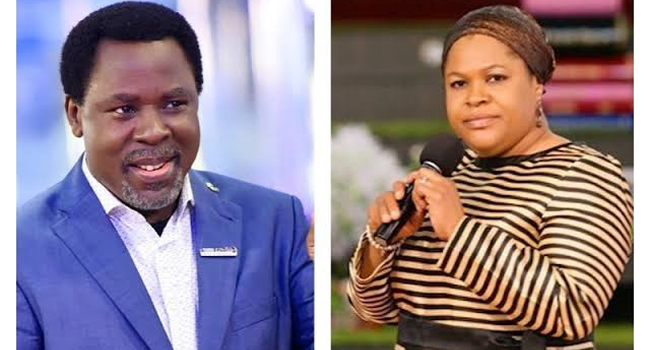 There are insinuations that Mrs. Evelyn Joshua, the wife of the late pastor and founder of the Synagogue Church of All Nations (SCOAN) Temitope Joshua popularly known as TB Joshua, would replace her late husband as the head of the church.

According to a report by AfricaNews, the church’s elders met recently and declared Evelyn, the successor to the late televangelist.

The report quoted a top aide of the late preacher as saying, “Someone must take charge immediately and give spiritual direction on the mode of service continuity. So much spiritual and financial effort went into building SCOAN and it cannot just waste away.”

Evelyn had met the late pastor in 1990 when she traveled to Egbe to visit her sister, while the late preacher was said to have proposed to her on the same day they first met after a 45-minute session.

Evelyn was said to have been serving as the second-in-command to her husband before his death earlier this month, performing the role of a preacher and offering counselling to church members.

The duo were married for 31 years and had three children together until Joshua’s death on June 5 at the age of 57.

READ ALSO: TB Joshua devoted his life for the downtrodden – CAN

The traditional rulers in Arigidi Akoko, the late televangelist’s hometown in Ondo had said the preacher would be buried in his hometown, however, the church elders intervened, and another decision was taken to bury him in his church at Ikotun, Lagos.

The weeklong event is scheduled to take place from July 5 to 11.

Also, Joshua’s lying-in-state is to be held on July 8, while the funeral and interment will follow on July 9. A thanksgiving service is scheduled for July 11, while all services will be broadcast live on Emmanuel TV.

SCOAN also assured its members that worship would not stop at the church, following its shutdown since Joshua’s demise.

Sanwo-Olu appoints ex-Accountant-General, 12 others as members of LASU governing council