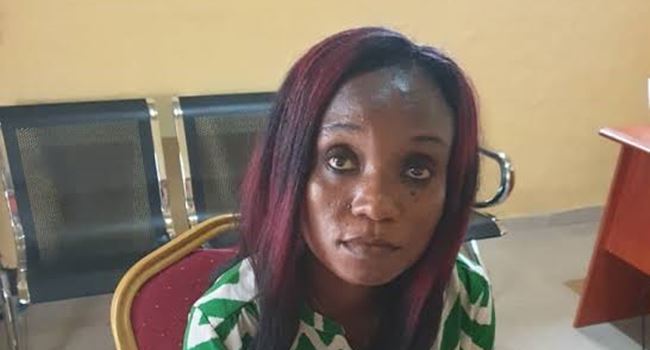 A 36-year-old woman identified as Chizoba Ogbonna has been arrested by operatives of the Inspector General of Police Special Intelligence Response Team IRT, in Abriba-Ohafia, Abia State, for allegedly staging her own kidnap.

The teacher, and mother of three was arrested with two others, Uche Anthony and Joseph Ezema, who allegedly assisted her to mastermind her kidnap, as well as negotiate for a ransom.

According to a source, the sum of two million naira was demanded by Ogbonna’s purported abductors who threatened to kill her before one of her relatives alerted the Inspector General of Police, Adamu Mohammed.

A crack team of operatives from the IRT, headed by Deputy Commissioner of Police Abba Kyari, was deployed to track an uncompleted building at Agborji community in Abriba-Ohafia area of the state with the intention of rescuing the victim and capturing her kidnappers.

However, things took a different turn when the operatives arrived at the building only to discover that the victim was having an affair with one of the abductors and had masterminded her kidnap to extort money from her relatives.

But the suspect denied staging her kidnapping, adding that she was hypnotized and charmed by one of the alleged kidnappers who happens to be her lover.

Her 30-year-old boyfriend, Joseph Ezema who debunked the allegation said Ogbonna came running to him for help after her marital crises with her ex-husband.

Ogbonna subsequently initiated the kidnap including a ransom that would be used as payment to fly out of the country.

The suspects have since been arrested and would be prosecuted and charged to court.