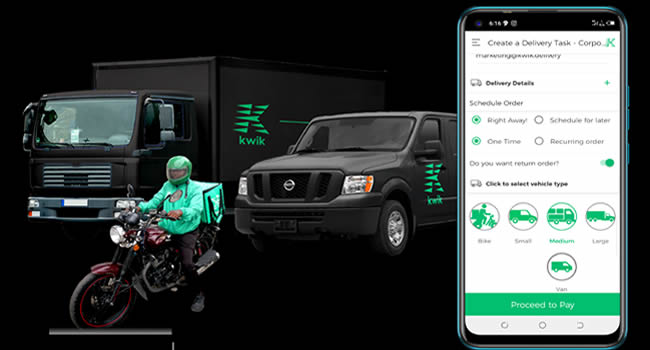 Delivery logistics company Kwik raised $1.7 million pre-Series A round while Kuda bank, on the other hand, raised a $25 million Series A.

Kwik Delivery successfully raised its $1.7 million pre-Series A financing round in equity from institutional and high net worth investors.

Although, the Kwik platform is currently open to ridersoperating in Lagos State, its app is available on iOS and Android.

Nigeria’s Kuda bank closed $25m Series A round towards growing its venture as the year progresses.

The five years old platform which started as Kudimoney is a full service digital bank.

Recall that Kudimoney, in June 2019, rebranded as Kuda after receiving a banking licence from the Central Bank of Nigeria (CBN).

From Nigeria to Toronto

The selection saw the startup securing US$120,000 in the process, setting its sights on global expansion.

Two-year-old Plentywaka was founded by Onyeka Akumah, Johnny Ena, John Shaibu and Afolabi Oluseyi as a bus-hailing solution that allows commuters to book and pay for trips in real-time.

The development will see Flutterwave to facilitate the possibilities of receiving and sending of money on PayPal for Africans.

Recall that before now, businesses in some African countries have faced a major challenge trying to receive money from PayPal.

The move, which was considered as part of its wider internationalisation and growth strategy, will see the firm add to its network of venture markets.

Epos Now is a global software and payments technology company, supporting over 35,000 retail and hospitality locations across 71 countries.

Related Topics:Nigeriaspacetechweekly digest
Up Next