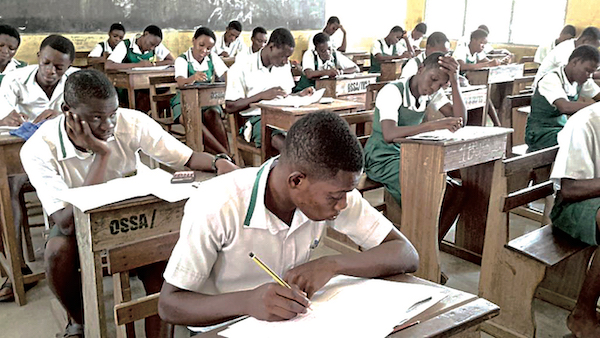 The council revealed that a total of ten schools were derecognised by it for engaging in mass cheating.

Four schools were derecognised in Adamawa, two in Katsina, Kaduna and Niger, while one each were affected in the FCT and Taraba State.

The NECO Registrar and Chief Executive Officer Prof. Godswill Obioma announced the deregistration on Wednesday in Abuja when the council released the October/November 2020 results.

He said: “The Council has a long standing tradition for zero tolerance for malpractices,” Obioma said. “Thus, it can be noticed that the malpractices incidence in 2020 dropped compared to the figure of 2019.”

He disclosed that the schools involved in the malpractices have been derecognised for two years, adding that 33,470 cases of malpractices were recorded during the October/November 2020 examination.

The NECO registrar also disclosed that 24 supervisors were blacklisted “for various offences ranging from poor supervision, aiding and abetting, connivance with non candidates to write answer on chalkboard and so on.”

Obioma said the results showed that 894,101 candidates out of the 1,209,992 that sat for the examination scored credit and above in English and Mathematics.

He announced that a special arrangements has been made for candidates who missed some of the examinations due to unrest during #EndSARS protest. Such candidates will have the opportunity to write the tests on February 1, 2021 during the SSCE external examination.

Obioma named some of the states affected as Oyo, Osun, Ekiti, Lagos, Edo, Ondo and some centres in Rivers, Abia, Enugu and the Federal Capital Territory (FCT).