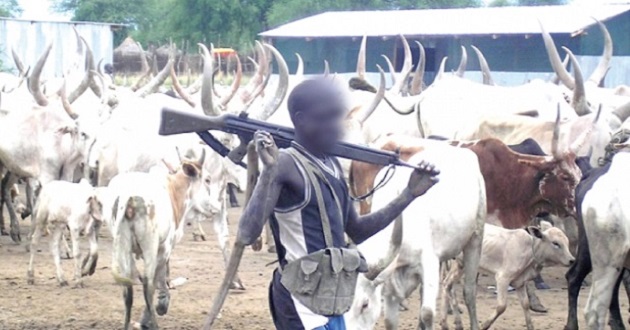 There is tension in the Barkin Ladi Local Government Area of Plateau State following the killing of three soldiers by armed herdsmen following an ambush.

The killing of the soldiers has been confirmed by the Nigerian Army.

Reports say before the attack, military authorities had raised an alarm that “the proliferation of arms in Plateau is out of magnitude,” and that it had “locked down the Barkin Ladi LGA completely” to ensure that no human being created further havoc in the area.

However, another fresh trouble seems to be brewing following the arrest and detention of Peter Gyendeng the Chairman, Committee on Public Accounts and Petitions and member representing the Barkin Ladi Constituency in the Plateau State House of Assembly.

Reports say Gyendeng was arrested and detained for eight hours by the military who tricked him.

Reacting to his arrest and detention Gyendeng said; “The truth about the whole thing is that on Thursday morning, I received a distress call that two people have been ambushed and killed by Fulani herdsmen on their way to the farm. So, I called the (OPSH) Sector Commander in Barkin Ladi who went there with his men. On getting there, the Fulani were there too. I was told that it was the Fulani who killed the three soldiers, although I wasn’t too sure. But that was what I heard.

“Around 10am on Friday morning, some of my boys were arrested. One of them had been arrested since July 17. I have been going there, but the father of the boy had not been given access to see his son. I was intimated on the issue, I went there. I was briefed about the complaint that somebody lied against the boy.

“We fixed Tuesday (next week) for the final settlement with the (OPSH) Sector Commander. We have been calling the complainant but he refused to show up. I went there to bail the boy since the complainant didn’t show up. I didn’t know that they have given instruction that I should be detained.

They didn’t give me any reason until my people came to bail me and get me out of the place. They said it was because of last week’s peaceful rally over the killings. I was detained from 10am till 8pm.”

The attack and killing of the three soldiers was confirmed and condemned by the Commander of the Special Military Taskforce Operation Safe Haven, Maj. Gen. Augustine Agundu.

He said, “I lost three men, they were killed in action as a result of this cycle of violence that has resurfaced. I lost some men yesterday (Thursday) because some persons decided to take laws into their hands and let me repeat again. There is no nation where you use crime to fight crime; there are constructive ways of engagement, no matter what the situation is.

“I have declared enough is enough; what happed in Barkin Ladi will never repeat itself again. I have locked down Barkin Ladi completely and no human being is going to cause further havoc in that LG.

Whatever that is going on in Barkin Ladi, Riyom, Bassa, and Bokkos LGs, that is enough and that is the message I want to send. The troops have resolved to bring the situation decisively under control from this moment henceforth,” he added.