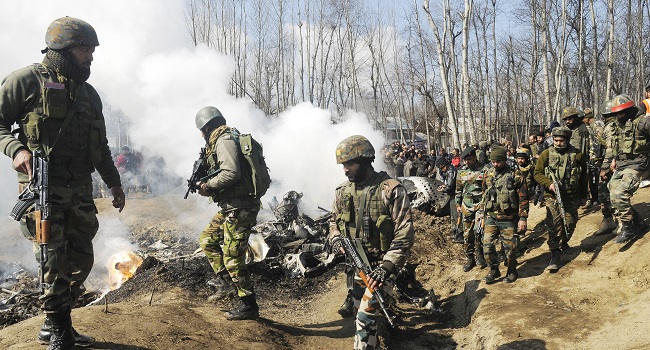 The diplomatic spat between India and Pakistan has reached boiling point if ongoings at the disputed region of Kashmir are anything to go by.

Reports say at least five civilians and two soldiers, and several others were wounded when Indian and Pakistani soldiers again targeted each other’s posts and villages along their volatile frontier.

According to local media reports, the nuclear-armed rivals fired mortars and artillery at each other despite the release of an Indian pilot who was shot down by Pakistan, but then sent back as a “peace gesture”.

The development comes days after President of the United States of America Donald Trump warned that the standoff between Pakistan and India is ‘very dangerous’.

Trump voiced the alarm following a deadly attack against Indian forces in Kashmir.

Pakistani authorities have sternly warned that they will respond to any attack by India with “full force”.

The warning was issued by the Pakistani army amid heightened tensions as Islamabad said it took over the base of a militant group that claimed the deadly bombing in Kashmir.

Moments after the deadly Kashmir attack, India’s Prime Minister Narendra Modi promised a “strong response” and also called for “the complete isolation of Pakistan” for harbouring the armed group behind the devastating attack.

One dead, 63 wounded, 45 detained as protesters call on Algeria President to step down