Home » Graffiti » The ‘Sins’ Of The Buharis! 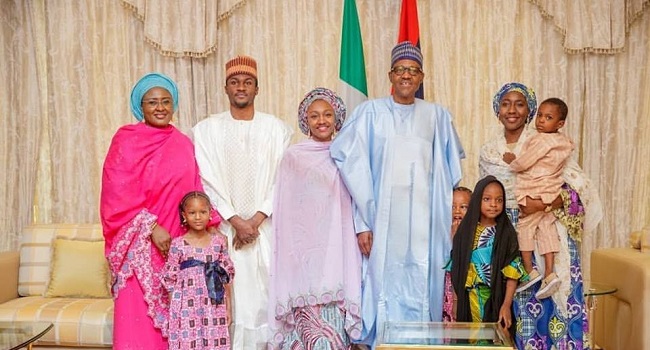 The presidential family anywhere in the world are one of power, privilege and limitless opportunities. But Africa remains an exception, a ‘special’ case for reasons of power abuse and absolutism. Take just four examples from Senegal to Equitorial Guinea, Gabon to Angola. Nigeria may not be among the four but that does not mean that the presidential offsprings in our homeland are immune from power abuse or corruption. Mohammed Abacha is ’eminently’ qualified to be included in this list. The late tyrant Sani Abacha’s son was notorious during his father’s despotism for his brutality and cupidity. While the late maximum ruler stole in billions his son pilfered in millions of Dollars!

When the old ‘ugly’ Abdoulaye Wade was in power in Dakar some years ago his ‘white’ son, Karim, was a super Minister with multiple supervising ministerial portfolios. So limitless and uncontrollable was the power he wielded that he was derisively called the “Minister of heaven and earth”! Today, Karim Wade lives opulently in Qatar (having been freed from prison by presidential grace). He was arrested, tried and convicted for looting of public funds under his care running into millions of Dollars. Wade the father had desperately wanted Wade the son to be President but circumstances post-power beyond his control had conspired to thwart such eventuality.

In Malabo Teodoro ‘Teodorin’ Nguema Obiang is officially the Vice-President of Equitorial Guinea. His father, Obiang Nguema Mbasogo, is the almighty President for more than three decades now. Mbasogo had overthrown and executed his uncle, Francisco Macias Nguema, after a bloody coup d’etat! The Mbasogos rule the tiny oil-rich country like their personal estate dispensing favours at their convenience. Opposition is practically non-existent. Teodorin lives like a Prince with posh cars, mansions and hefty bank accounts at home and abroad.

In the past he had resisted attempts by the US administration to seize some $71 million worth of his assets linked to money laundering in America. But recently the French authorities had tried him in absentia in France for fraudulent assets’ acquisition and found guilty. His material and fiscal possessions were consequently confiscated in the Macronian land!

In Libreville the late Omar Bongo died ceding power to his ‘illegitimate’ son, Ali. Following a devastating stroke he suffered few years ago leading to months of medical tourism abroad Ali had since returned to his exalted seat but some Gabonese are still interrogating his capacity to lead. And to be safer at his presidential castle and consolidate his position Ali had nominated his young son as the Coordinator of Presidential Affairs. Noureddin Bongo Valentin is in his late twenties. In the event of Ali hitting the ground and kicking the bucket Noureddin would probably take over as the ‘Overseer’ of the Bongo estate!

In Angola President Joao Lourenco is reportedly purging the system of corruption and cronyism associated with the Dos Santos for decades. His determination to wipe away the Dos Santos power dynasty is evidenced by his fearlessness in taking on the children. The son and daughter of the indisposed long-serving President, Jose Eduardo dos Santos, have had their days in the Tribunal for power abuse, money laundering and fraud. Isabel dos Santos, worth billions of Dollars, was once rated the richest African woman! Dos Santos and family had looted the Angolan resources for many years in a police state with little or no dissidence post-Savimbi.

In terms of megalomania, show(wo)manship and pathological love for the filthy lucre Miss Hanan Buhari may not be Isabel the Jezebel from Savimbi-land. She is just a young and promising student studying abroad. But Hanan Buhari is in the news lately for wrong reasons. For one, she had solicited the illegal help of the Department of State Services (DSS) to track down one Anthony Okolie in Asaba, Delta State. A businessman Okolie was said to be using the MTN mobile number Hanan Buhari had previously used and ‘abandoned’.

Citizen Anthony had bought the recycled number from an MTN outlet in town unaware that Hanan had been in possession of same. Subsequently he was arrested, manhandled and forcefully flown to Abuja by the DSS goons. He spent months inside the DSS gulag without trial! Upon his release recently Okolie had confessed that ‘suicide’ had been on his mind lately given the accumulated debts he had incurred as a result of his prolonged absence from home.

The problem here lies in an oppressive abuse of power. How on earth could someone have been so maltreated for buying and using a mobile line from the agency of the network provider? How could Okolie have known that the number he was using was once used by Hanan Buhari? And above all, why did the President’s daughter not direct her anger or whatever complaint she had towards the MTN? Something, indeed, is democratically wrong with a system that allowed this kind of human rights violation.

For another, as the opprobrium that greeted the Okolie maltreatment had hardly died down Miss Hanan came back home and headed to Bauchi in a presidential jet! While the presidency, the First Lady, her mother, Aisha, and MURIC had defended her action those who should know better had condemned such extension of a privilege reserved for the elected.

President Buhari rose to power as ‘Mr Integrity’ but the much-vaunted integrity of his is now in tatters. He not only accommodates the corrupt but wines and dines with reprobates in the system. He preaches patronage of the local health facilities yet conveniently seeks medical assistance abroad! What megalomania!

The Buhari family has, one way or another, committed ‘sins’ against the Nigerian nation. The President himself for abandoning his duty post few years ago for medical tourism in London that lasted months. The overall cost of the healing voyage outside our shores remained a well-kept secret of the state. The son, Yusuf, for recklessly getting himself involved in a bike crash leading to hospitalisation abroad. The amount of the tax-payers’ funds generously expended was never disclosed and no rebuke was ever extended towards Yusuf for his recklessness.

And now Hanan for causing to be detained an innocent man for doing nothing! And recently for riding in a presidential jet on a private trip (nay excursion) to Bauchi. Put together history may not be very kind to the Buharis for these ‘sins’ post-Buharism.