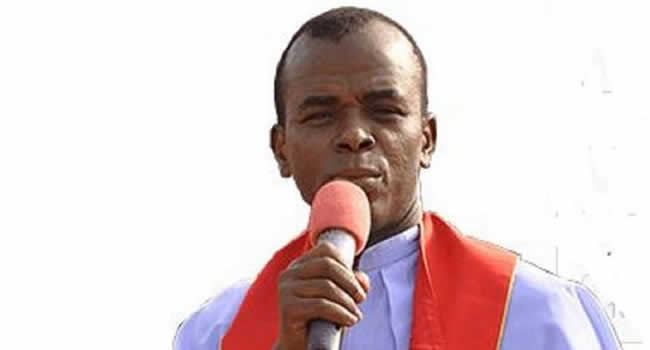 The Ohanaeze Ndigbo Youth Council (OYC), has flayed the purported invitation of the Spiritual Director of the Adoration Ministry (AMEN) Enugu, Father Ejike Mbaka, by the Directorate of State Services (DSS) warning that there will be war if anything should happen to the Catholic Priest.

Mbaka had, on Sunday, during a programme at the Adoration Ground, raised the alarm over his invitation by the DSS, announcing that he had been summoned to report to their office in Abuja.

The OYC, in a statement on Monday issued by the President-General, Mazi Okwu Nnabuike, said it would not condone further harassment of the priest with the intention of silencing him.

“I condemn the invitation because it is a plan by the Federal Government to silence Fr. Mbaka; whoever speaks without supporting the government they now come for the person, just like it banned Twitter.

“There will be war if anything should happen to Father Mbaka.

Read also: 10 lessons Fr. Mbaka’s fight with his Bishop has for business and leadership

“DSS has no reason to invite Mbaka. The same Mbaka prophesied the emergence of Buhari, he was not invited by DSS then, but now that he is talking about the state of the nation, hunger and killings in the land, DSS came to invite him.

“But we warn that any plot against Mbaka must be resisted by Igbo youths, let nothing happen to him. This onslaught against a revered priest in Igbo land should stop forthwith.

“The Enugu Catholic Bishop should cease from trying to silence Mbaka. Mbaka has been talking under two past Bishops- Eneja and Gbuji, they did not disturb him. We are in the know that the FG is on the neck of Onaga to silence Mbaka.

“They want Mbaka banned and sent out of the Catholic Church. But they must know that the physical cannot control the spiritual.

“Mbaka should continue to prophesy to the world, those who don’t have such a gift are just envious of him”, he stated.

Related Topics:MbakaOhanaeze Youths
Up Next

Students want Buhari to declare state of emergency over insecurity