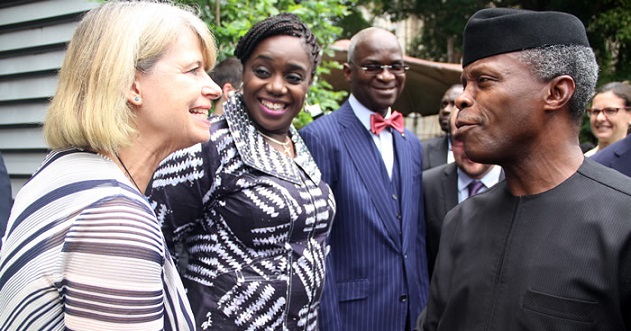 The UK Government is set to launch a £70 million programme to create 100,000 jobs in Nigeria, its Minister of State for Africa, Harriett Baldwin, has announced.

Baldwin said this during a business event as part of the activities for Prime Minister Theresa May’s visit to Nigeria on Wednesday.

Baldwin, who led a business delegation to the event, said that the programme would raise the income of three million people from the poorest parts of Nigeria.

“Today, it is all about celebrating those links through technology and I am very excited that the Prime Minister is announcing today a new £70 million programme that will create some 100,000 jobs in Nigeria and will also raise the income of three million people from the poorest parts of Nigeria.”

The minister said that the event was celebrating the role of growing businesses and entrepreneurs and also highlighted the partnerships of both countries in the area of technological development.

She added that the delegation consisted of various UK businesses were willing to invest “the kind of capital that creates jobs”.

Vice President Yemi Osinbajo and the Ministers of Finance, and Power, Works and Housing, Kemi Adeosun and Babatunde Fashola respectively, attended the event.

Osinbajo said that the Federal Government was keen on driving technology development in the country in support of the government’s economic growth plan.

The vice president said there was the need to create the right environment for technology companies to thrive and further gave an assurance of the government’s commitment to support innovation in the country.

“I think just looking at some of the start-ups that we see today, many of them started while the recession was on and they proved, by just a number of jobs, value and wealth created, that this is the future starting today.

“This is why we have started up first with the creativity and technology advisory group; many of these start-ups are members of this group where they help to formulate policies with Federal Government policy makers especially in fintech, which are some of the new areas we need to formulate policies.”

Ekiti, Rivers, Bauchi, 9 others raise foreign debts of states by $131m in 6 months