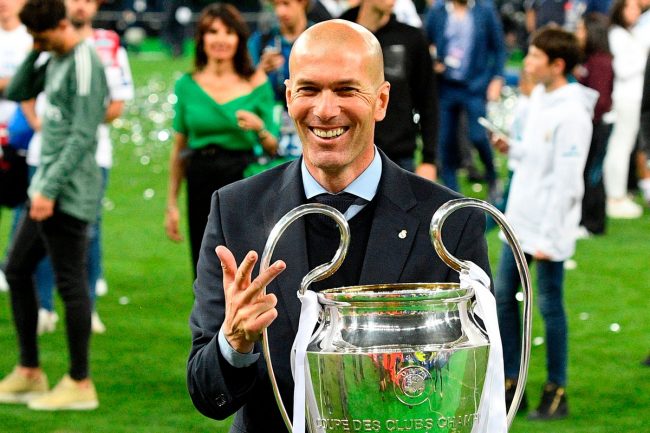 Real Madrid boss Zinedine Zidane has heaped praises on his players after they saw off Liverpool 3-1 in the Champions League final on Saturday to win the title a third consecutive time.

The Frenchman maintained his fantastic run in Europe as a manager, as he led the La Liga side to their 13th Champions League triumph.

After a goalless but eventful first half that saw Mohamed Salah and Dani Carvajal replaced early, Karim Benzema scored the opener on 50 minutes from a careless throw by goalkeeper Loris Karius.

But the lead was short lived as Sadio Mane equalised for Liverpool just five minutes after finishing off a corner.

Gareth Bale came in on the hour mark replacing Isco and put Real ahead with a stunning bicycle kick from Marcelo’s cross with his fourth touch in the game.

The Welsh made it 3-1 with a shot from 30 yards that slipped through the hands of Karius.

Speaking after the game, Zidane told journalist: “Great emotions. To lift three Champions League trophies with this club, this team is magnificent. We don’t quite realise what we have achieved yet.

“We are going to enjoy the moment. We had a complicated season but to finish with this makes us really happy.

“I have had a little bit of time to think about what this means. This is the status of this club. It is a legendary club, one that has won 13 Champions Leagues and I am happy to be a part of its history too.”

About Bale’s first goal, he said: “It is the latest thing we have witnessed. It was magnificent.”

Real finished 17 points behind rivals Barcelona in La Liga this season but they are kings of Europe again.

Zidane who joined the Real in 2016 has never been knocked out of Europe as a manager and becomes just the third manager to win the European Cup/Champions League three times (after Bob Paisley and Carlo Ancelotti), but the first to win it in three consecutive seasons.