Home » Politics » Though ‘powerless’, Northern govs meet, strategise on insecurity in their region 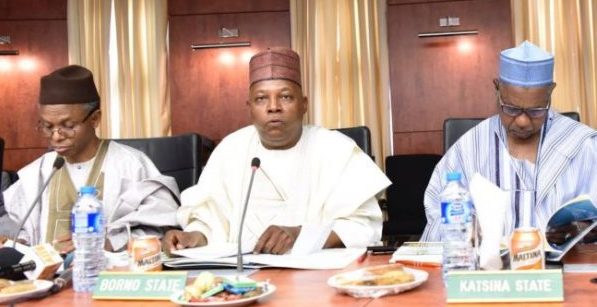 Plagued with vexed issues of Boko Haram terrorists and killer herdsmen, northern governors on Thursday met in Kaduna State to deliberate on measures to address the insecurity issues in the region and the country in general.

This is against the backdrop of contentions that though governors are the chief security officers in their respective states, they lack the powers to galvanise the security agencies to act, as such agencies take their orders from the federal government.

In his speech at the meeting, the chairman, Northern Governors’ Forum and governor of Borno State, Alhaji Kashim Shettima, told his colleagues that the situation has got to the point they must take hard and critical look at conflicts in the country with a view of coming up with implementable ways and means of addressing them head-on.

He said “As elected leaders, it is our primary responsibility to take a hard and critical look at these conflicts and come up with implementable ways and means of addressing them squarely.

“It is also critically important, as a long term measure, device viable strategies to forestall all forms of security challenges that may likely erupt in the future.

“I need to emphasize that whatever resolutions we may arrive at, should be without prejudice to the various commendable and comprehensive measures being put in place by the Federal Government in addressing the security challenges; especially the recent abduction of the Dapchi School Girls”.

He continued, that “In the last few days, Taraba and Kaduna States have again experienced spates of deadly and destructive communal clashes which culminated in the loss of many lives and destruction of millions of naira worth of property.

“Although the security agencies have responded positively and are now on top of the situation, we, as a forum, need to pay particular attention to the root causes of such conflicts and their seemingly intractable nature with an open mind and from an unbiased perspective, in order to arrive at comprehensive means of addressing them.

“We should, in the process, also avoid inputting political, ethnic or religious colorations to the conflict.”

Speaking on one of the agenda for the day’s meeting, which borders on the New Nigeria Development Company Limited (NNDC), Shettima said, “Your Excellencies may recall that we had earlier wanted to summon a 2-Day Extra-Ordinary meeting of the forum to solely discuss and resolve all the issues raised by the NNDC, but the meeting could not hold due to certain extenuating circumstances. So it is imperative this time we devote considerable time to deliberating and resolving the issues concerning the NNDC.

“It is a known fact that the current Board and management of the NNDC have, in the last few years initiated commendable measures aimed at resuscitating the company as the economic lived wire of the region.”

The forum chairman, noting that some appreciable progress had been made, however said that there were still quite a number of institutional challenges and inadequacies that need to be addressed to enable the company to forge ahead and achieve its desired objectives.

“These include recapitalization of the Company’s share capital from N500 million to N2.750 billion, the resuscitation of Kaduna Textiles Limited and the urgent need to ensure the full take-off of the New Nigeria Commodity Marketing Company. These are just few of the critical areas of concern in respect of the NNDC which we, as a Forum, need to strategically examine and adequately resolve,” he said.

Also speaking on the issues of restructuring of Nigeria, Shettima recalled that following the resolution of the forum, that a special committee was set up to solicit the views and comments of various groups and sections in the northern states in respect of the then persistent calls for restructuring of the country.

According to him the committee on restructuring which is headed by the governor of Sokoto State, Alhaji Aminu Waziri Tambuwal, is expected to submit its Interim Report this Thursday (today), which will be an acceptable common position for the region on the matter.

“We may recall that the concept of restructuring, at the initial stage, had taken various dimensions which included resource control, regionalism and geopolitically divisions among others.

“So it was imperative that the North as a region like other regions of the Federation should have a common position on the issue; hence the establishment of the Committee,” Shettima said.