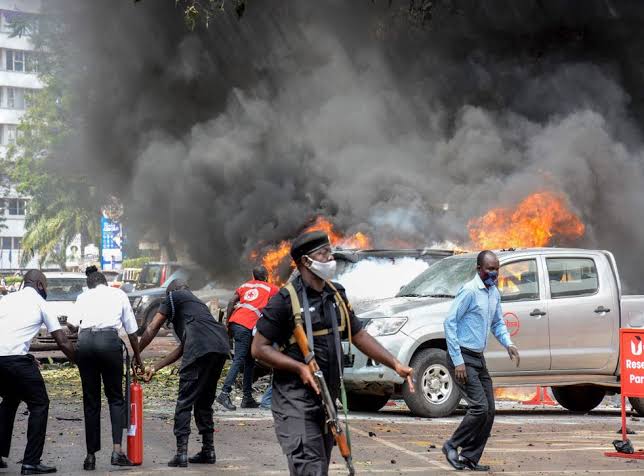 At least three police officers were confirmed killed and more than 30 people sustained different degrees of injuries after two explosions hit Kampala, the capital of Uganda, on Tuesday morning.

According to police reports, the two explosions rocked the city center within 30 minutes of each other, with one blast going off near the Central Police Station and another near the country’s Parliament.

A journalist who was at the scene of the first explosion, said it occurred at about 10a.m local time on Kampala’s busy Buganda Road.

The Deputy Executive Director at the Mulago National Referral Hospital, Dr. Rose Byanyima, said the hospital received 27 people with multiple injuries from the blast at the Central Police Station.

She added that all of the patients were police officers – seven women and 20 men – and that 19 people were in critical condition.

“There has been a bomb blast at the headquarters of the Ministry of Information and Communications Technology and National Guidance.

“All of us are safe. A few colleagues were hurt by flying window glasses and debris.”

The cause of the explosions was not immediately clear and no group has claimed responsibility.

Related Topics:Uganda explosion
Up Next