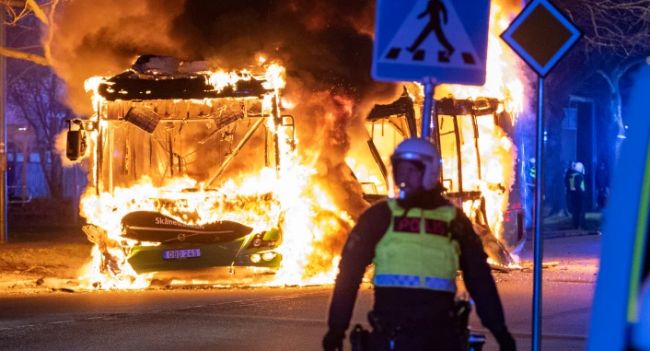 At least three people have been confirmed injured after Swedish police fired “warning shots” on protesters in the eastern city of Norrkoping against a planned burning of the Holy Quran by a far-right group in the country, a statement by the Swedish police said on Monday.

The violence which entered its fourth day on Sunday, began on Thursday after a demonstration organised by Rasmus Paludan, leader of Danish far-right political party Hard Line, became violent.

Four people were also arrested among the approximately 150 participants, as protesters threw stones at officers and set cars on fire, the police said.

“Police fired several warning shots. Three people seem to have been hit by ricochets and are now being cared for in hospital,” the statement said, adding that none of the injuries was life-threatening.

“All three injured are arrested on suspicion of crime,” it added.

Paludan, who had permission for a series of demonstrations across Sweden during the Easter weekend, is known for Quran burnings but this time, his plans are being met with stiff resistance by pockets of Muslims in the country.

According to health services officials, 10 people were hospitalised with minor injuries following the clashes and similar unrest in the neighbouring town of Linkoping, where Hard Line also abandoned a demonstration.

In the city of Malmo, a bus caught fire after unknown perpetrators threw a burning object at the vehicle, broadcaster SVT reported.

“Passengers managed to escape the vehicle before anyone was hurt while other vehicles and several dustbins were also set on fire in Malmo and police were pelted with stones and Molotov cocktails on Saturday night,” local media reported.