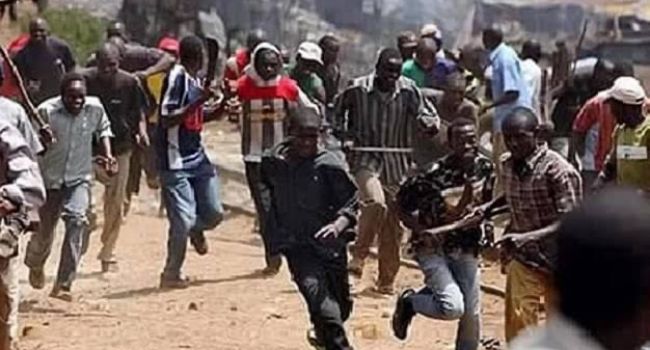 Three persons have been confirmed dead after gunmen suspected to be Fulani herdsmen invaded and attacked the Molege Town in Ose Local Government Area of Ondo State on Thursday, setting several homes ablaze in the process.

According to the State Commander of the Amotekun Corps, Chief Adeleye Adetunji, several houses were razed down “along Elerinla near Arimogija by the rampaging herders who were irked that the villagers prevented their cows from feeding on their farmlands.”

“From what we gathered, the Fulani herdsmen were earlier chased away from the community and they mobilised and attacked the villages and set houses and the farms on fire.

“The villagers took to their heels while their properties were destroyed by the herdsmen,”Adetunji said, adding that the herdsmen also attacked the security team who had gone to the community to restore calm.

“While on a routine patrol at Molege in Ose Local Government Area of Ondo State, our men were informed that some nearby villages in Molege have been taken over by herdsmen while the burnt down some people’s properties.

“We moved in with three patrol vehicles and took control of the situation in the village.

“On their way back, some men suspected to be herdsmen suddenly open fire on our men in an unprovoked attack because Amotekun does not want to start shooting people.

“We are trying to find out who they are as an adequate investigation is ongoing.

“We urged the people of the community to come back to their homes as peace has returned back to the village.”

Also confirming the attack, the lawmaker representing Owo/Ose federal constituency in the House of Representatives, Hon Timehin Adelegbe, condemned the attack and described it as barbaric.

”I initiated and executed the rehabilitation of Arimogija/Molege/Okeluse road last year when the terrorists masquerading as herdsmen kidnapped about six villagers at the failed portions of the road to dislodge them from the road.

“There is a serious need for a security post at the junction to checkmate the senseless attacks on the innocent villagers.

“lt has become a matter of urgency to provide other logistics such as vehicles to facilitate the patrol of the area by security personnel to ward off further invasion by the bandits,”
Adelegbe said.

Related Topics:HerdsmenOndo Town
Up Next