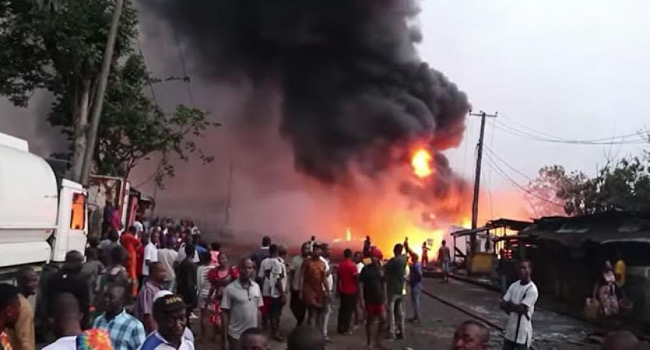 At least three persons are feared dead with an unspecified number injured following an explosion at a tank farm in Warri, Delta State late Friday.

The Chairman of Warri South Local Government Area, Dr. Michael Tidi, who confirmed the incident, said the explosion occurred at the Matrix Tank Farm located at in Ifiekporo, in the council area.

Dr. Tidi, while calling on residents of the town to remain calm in a radio message, said that the explosion was caused by flame which led to a massive fire that gutted some of the farm’s loading bay. He however, assured that fire fighter were doing everything possible to put out the inferno which was still burning into the early hours of Saturday.

Also confirming the incident, Alhaji Luqman Salam-Alada and Fred Olomoro, CEO and Safety Manager of Matrix Energy, respectively, said the situation was under control as the Delta State fire service had responded on time and had brought the fire to a manageable stage.

Related Topics:DeltaDelta Explosion
Up Next