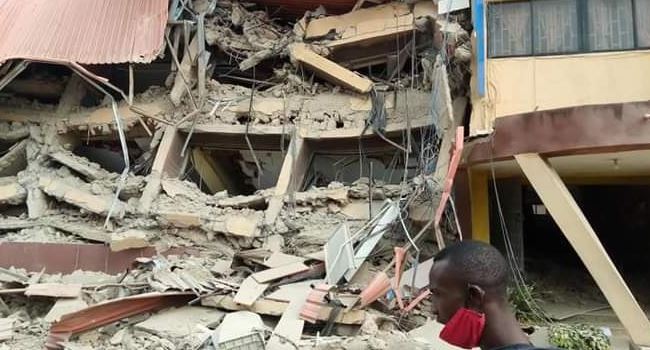 A three-storey building housing a school, on Saturday collapsed in Ejigbo area of Lagos state.

The sad incident occurred at Number 15, Ansarudeen Street, Ile-Epo bus-stop, at about 8.15 am.

So far, there are no reports of casualties recorded, as the school was closed down due to the covid-19 pandemic.

According to eyewitnesses’ account, the privately-owned building belonging to Excel College had previously shown signs of distress and the school was planning to renovate/refortify the structure before the collapse.

It was gathered that the three-storey building had two wings conjoined buildings. Unfortunately the collapsed wing, had seriously affected the adjourning wing, as visible cracks could be seen on the walls, pillars and decking.

The Director-General, Lagos State Emergency Management Agency LASEMA, Dr. Olufemi Oke-Osanyintolu confirmed the development saying responders to the incident scene were LASEMA, Police (Ejigbo Division) and other emergency responders to ensure the safety of students in preparation for reopening of schools on Monday.

Related Topics:LagosThree-storey school
Up Next