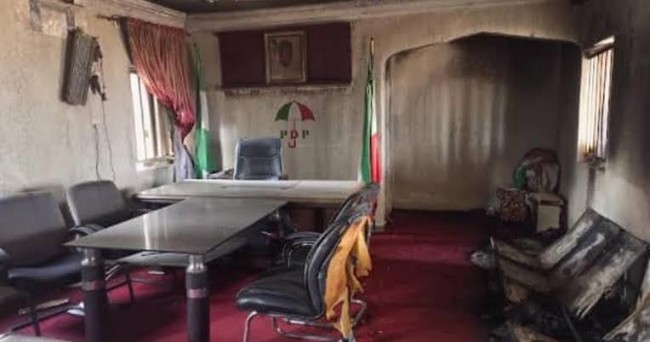 Vandals have reportedly burnt the Secretariat of the People’s Democratic Party (PDP) in Gombe State.

The vandals, suspected to be political thugs also made attempts to burn down the campaign office of Presidential hopeful and former Vice President, Atiku Abubakar, after they had vandalised the office.

The campaign office, which is situated near Investment Quarters, about eight kilometres away from the Gombe metropolis, had its windows broken, while other items like Air Conditioners were reportedly carted away.

The PDP secretariat, which is located along Bauchi road, was reportedly invaded and set ablaze around 1:30am on Tuesday.

The fire was however put out by Fire fighters, with assistance from men of the Nigerian Police Force

Addressing newsmen on the issues, PDP Chairman in the state, General Audu Kwaskebe (Rtd), accused Youth Leader of the All Progressives Congress (APC) in the state, Kawu Lero, of spearheading the burning of the secretariat.

He said they had written a petition to the state police command for appropriate action.

However, the state PRO of the APC, Mr Moses Kyari, countered the allegation, saying that it was PDP members that set their office on fire, “due to internal crisis over control of the party structure.”

Ambode hints at comeback, charges youths to get PVCs