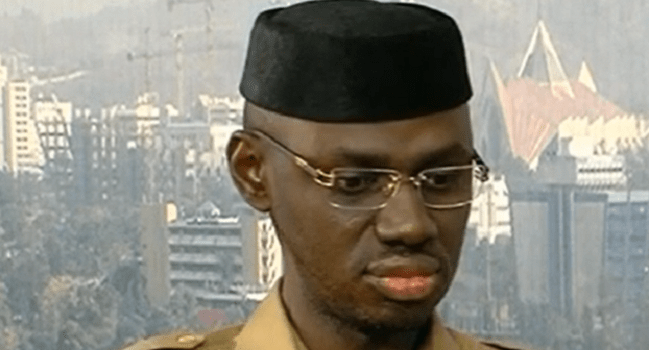 A former Deputy National Publicity Secretary of the All Progressives Congress (APC), Timi Frank has countered claims by the Minister of Information and Culture, Lai Mohammed that Nigeria was more secured at the moment than it was in 2015.

Frank, in a statement on Monday in Abuja, insisted that Nigeria has never had it worse in terms of insecurity as it is having at the moment, describing the minister’s statement as irresponsible.

Ripples Nigeria reported that Mohammed had said at a news conference in Abuja that ‘despite the rising security challenges facing the nation, Nigeria is still safer under President Muhammadu Buhari than what he met on assumption of office in 2015.’

In his reaction, Frank insisted that the minister’s claim was misleading, false and irresponsible.

According to him, the country is not only faced with threats from Boko Haram but that the killings, kidnappings and communal clashes orchestrated by killer herdsmen have worsened under Buhari.

He also accused the Buhari-led APC Federal Government of using the instrument of state to shield killer herdsmen from prosecution, adding that this has emboldened the herdsmen to continue their heinous crimes against innocent Nigerians.

He further noted that the “refusal by the security agencies to arrest and prosecute the killer herdsmen smacks of complicity.”

He said further: “How can you say, with such irresponsible effrontery, that a country whose people are being killed in hundreds on daily basis and their properties worth billions destroyed by a group named by the Global Terrorism Index as Africa’s number one and the world’s third most deadliest terrorist group, is safer under Buhari?

“There is no region in the country where these herdsmen reside that there are no killings, raping of women, kidnappings and destruction of farm lands. The most recent is in the South West.

“Nigerians can recall what these murderous herdsmen did in Benue state, where they killed scores and declared war on the people. The kidnap of over 350 Kankara school boys in Katsina state and the payment of huge ransom by government to secure their release is a recent memory.

“Is it the terrorist Boko Haram group that the Buhari government has contained as promised? Was it not under Buhari that insurgents abducted 110 schoolgirls from Dapchi, Yobe State?

“Till date, killer herdsmen go about with weapons, killing people, raping women and destroying farm lands with their cattle and no action has been taken by Buhari to dissuade or stop them.

“What makes it even worse is that when they some of them are arrested and handed over to the police, they are soon set free. This shows that even the security agencies are complicit. They are apparently benefiting from the rising spate of insecurity in the country.

“I therefore call on the international community to come to the rescue of Nigerians. I also urge state governors to rise to the occasion and ensure that the lives and property of their people are secured.

“I call on Nigerians to take the security of their lives and property in their hands.”