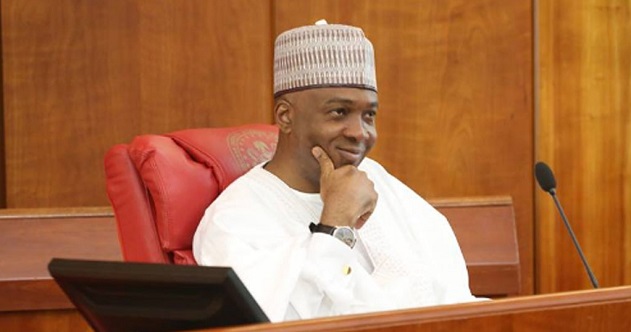 In reaction to an earlier statement, Senate President, Bukola Saraki has challenged the National leader of the All Progressives Congress (APC), Bola Tinubu, to substantiate his allegation that he and other lawmakers have the habit of padding budgets.

Tinubu had, on Sunday, accused the Saraki and the Speaker of the House of Representatives, Yakubu Dogara, of allegedly hijacking and padding national budgets for the four years that the party had been in power.

He claimed that the two presiding officers of the National Assembly always padded the budgets with pet projects that profited them while they cut funds appropriated to projects that would have benefited Nigerians.

Responding to this accusations, Saraki, in a statement by his media aide, Yusuph Olaniyonu, said Tinubu’s attack was unfounded and a scheme to support his  2023 Presidential ambition.

Saraki stated that the APC leader is ignorant of the legislative process that leads to budget passage.

“First, he (Tinubu) alleged that national budgets were delayed, distorted, padded, new projects introduced, funds for projects reduced, “to halt the progress of government”. It is unfortunate that a man like Tinubu who had been in the Senate (though for 22 months and under a military regime) should have a better understanding of how the legislature works.

“The passage of budgets is definitely not the exclusive responsibility of the leadership of the Senate. Most of the work is done in the various committees. These committees are headed by senators representing different parties. It is the level of co-operation between the committees and the MDAs in the timely defence of the budget proposals and the ability of the two chambers of the National Assembly to reconcile their figures that usually determine how soon the budget is passed. To put the blame of budget delay on the Senate President or Speaker can only be mischief, or at best, playing to the gallery.”

“In all the three budgets already passed by the National Assembly, we challenge Tinubu to make specific reference to where Dr Saraki and the leadership of the National Assembly “sought to pad with pet projects” as he alleged. Tinubu should be graceful enough to substantiate this allegation. We consider that allegation careless, irresponsible and callous. We, therefore, demand that he should withdraw it.”

Also, Saraki noted that ‘it is within the power of the legislature to make changes’ and such cannot be equated as padding.

“A good example is the decision by the National Assembly to include in the 2018 budget the one per cent of the total budget, amounting to N33 billion, as allocation for Universal Health Coverage as provided by an extant law, which had been hitherto observed in the breach. Is this what Tinubu considers as budget padding? And this was a decision which was praised across the world as a real benefit to ordinary people across the country.”

“We wonder what these “legislative initiatives” are because in the four years of the Buhari administration, it has only forwarded 11 bills to the Senate, apart from the routine annual appropriations and supplementary budget proposals.”

Out of these bills, Mr Saraki said: “two have been passed, one withdrawn, one rejected and remaining seven currently at different legislative stages.”

He boasted that the Senate, under his leadership, has passed the highest number of bills, 282, far more than others before him.

Saraki insinuated that the APC leader is still pained about his emergence as Senate President.

“Tinubu and his mob have been sponsoring the narratives in the media that the emergence of the present leadership of the National Assembly was a mistake. We hereby submit that Dr Saraki and other leaders of the National Assembly were democratically elected by their colleagues. And it is because they are the choice of their colleagues that they have remained in office for the past 46 months, despite all the plots hatched by anti-democratic, reactionary and fascist elements pretending to be ‘progressives’.

“In fact, Tinubu should know that if there was any mistake made on June 9, 2015, It was the miscalculation by himself and his small cabal in the APC who felt they could decide for the Senators-elect and House of Representatives Members-elect. When they failed after their grand-standing that they could always got whatever they desired, they resorted to undermining the institution of the legislature and waging a campaign of calumny against the lawmaking body.

“It is now clear that those who took senators away from the chambers contrary to the directive contained in the proclamation signed by President Muhammadu Buhari on June 9, 2015, are ‘mistake personified’. It is obvious that if they repeat that arrogance during the inauguration of the 9th National Assembly, they will fail again because Nigeria is greater than them. The institution of the legislature is bigger than the over-bloated egos of these power mongers and dirty schemers.

“Let us repeat again that we know that a Machiavellian politician like Tinubu will forever agonise over his erroneous belief that Dr Saraki frustrated his ambition from becoming running mate to President Muhammadu Buhari through a Muslim-Muslim ticket in 2015.

“In his usual cavalier manner, he will stop at nothing to punish Saraki for that. We know that this attack is not about the interest of the nation or that of President Muhammadu Buhari. It is about his 2023 ambition and it is obvious in the statement as he struggled to explain this away.”

Tinubu, Oshiomhole witch-hunting me because I stopped their imposition of candidates- Akeredolu