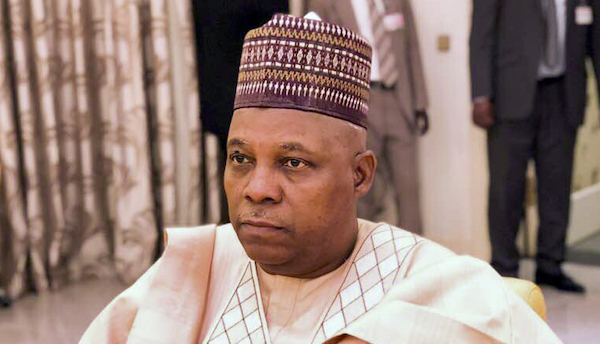 The former Borno State governor, Kashim Shettima, said on Friday only the All Progressives Congress (APC) National Leader, Bola Ahmed Tinubu, has the capacity among the party’s aspirants to defeat the Peoples Democratic (PDP) Flag bearer, Atiku Abubakar, in next year’s presidential election.

Only 13 after aspirants will vie for the APC presidential ticket in next Monday’s primary after the party’s screening committee disqualified 10 aspirants during the screening exercise held earlier in the week.

Kashim stated this when he featured in a Television Continental (TVC) programme monitored in Lagos.

He dismissed the insinuations that Tinubu had been disqualified from the APC presidential race, saying it would be catastrophic if he was denied the party’s presidential ticket.

The ex-governor insisted that the APC chieftain has the experience, exposure and elusive mind to act as Nigeria’s president.

Shettima also described the former Lagos State governor as the most successful politician the South-West had ever seen.

He said: “Tinubu has the right of first refusal for the position of Nigeria’s president because he has paid his dues. Yesterday in Abeokuta, he made some remarks that were deliberately distorted and quoted out of context.

“ He played a crucial role in the ascendency of President Buhari whether people are willing to admit it or not. Without Tinubu’s support, even with the President’s bulk votes in the North, he would not have become the President.

“Let me be sincere with you, it will be catastrophic for APC if Asiwaju is denied the presidential ticket. I’m not a prophet of doom but that’s the reality.

“However, we have done our own bidding and by God’s grace, my principal, our candidate will emerge as the presidential flagbearer of the APC in the next 72 hours.”