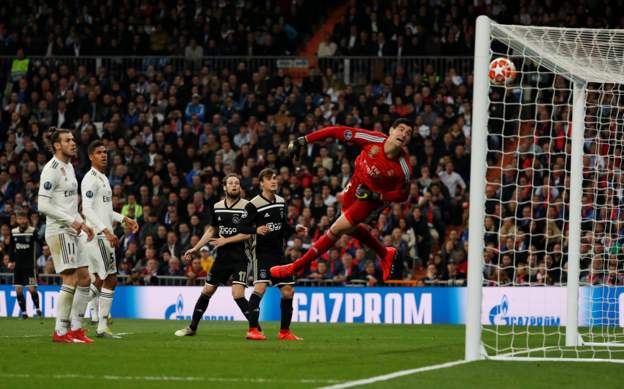 Three-time defending champions of the UEFA Champions League, Real Madrid have crashed out of the competition after falling 4-1 at home to Netherlands club, Ajax on Tuesday night.

Trailing 2-1 from the first leg, a brilliant Ajax side stunned the 13-time European champions to advance to the quarterfinals with a 5-3 aggregate win.

After just 18 minutes in the game at the Bernabeu, forwards Hakim Ziyech and David Neres fired Ajax into aggregate lead.

Dusan Tadic, who provided the first two goals, then added a brilliant third in the 62nd minute, before Marco Asensio pulled on back on 70 minutes.

But Lasse Schone sealed the win with a spectacular free-kick and the hosts were in added time reduced to 10 men as Nacho was sent off.

Ajax are progressing from a Champions League knockout tie for the first time in 22 years.

In Germany, Bundesliga side, Borussia Dortmund also crashed out of the competition after a 4-0 aggregate defeat to Tottenham Hotspur.

The English Premier League side had won the first leg in Wembley 3-0 to put themselves in the commanding position.

A 48th-minute goal by Harry Kane added to Dortmund woes and sealed the passage for Spurs into the last eight 9f the competition.

With the goal, Kane became the club’s top scorer in European competition, as the goal was his 24th goal in Europe for Tottenham.

The draw for the quarter-finals is on Friday, 15 March.