Home » Sports » UCL: To lose like this is inexcusable, all I can do is apologise – Valverde 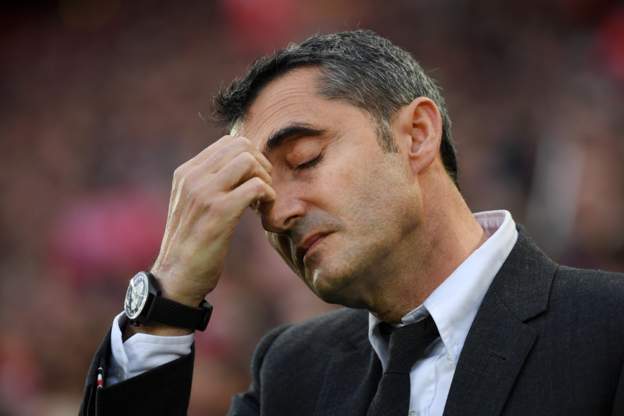 Barcelona boss Ernesto Valverde says all he can do is apologise to the traveling fans after his side surrendered a 3-0 lead to crash out of the Champions League.

The Spanish champions were thrashed 4-0 loss at Liverpool, who overturned a three-goal deficit to reach the final of the competition, thanks to braces by Divock Origi and super substitute Georginio Wijnaldum.

With Barcelona struggling on the pitch, their manager was unable to explain their capitulation during his post match interview.

“They (Liverpool) started aggressively, as we expected, but to lose like this is inexcusable.

“To begin the game with a 3-0 lead and to lose 4-0 is simply unacceptable.

“This has happened to us for the second year in a row, and this is especially painful for everyone involved.”

With the game poised at 3-0, Valverde made two defensive substitutions, but his side were unable to hold off Liverpool’s push for a fourth goal.

“I don’t know what happened with the fourth goal,

“When I saw the cross comes into our area, it was already in the goal.

“The next few days will be horrible, we know that, but we must get through it.

“All I can do is apologise to the fans that have travelled.”

Liverpool have now reached the final of the Champions League for a second consecutive time, and will face Ajax or Tottenham in Madrid on June 1st.