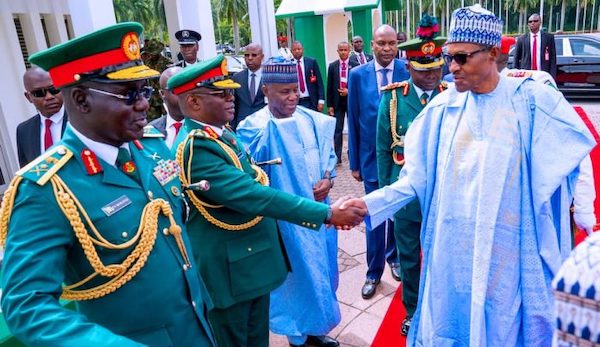 The presidency on Thursday listed the achievements of the military in the ongoing fight against Boko Haram insurgency and violent crimes in Nigeria.

The Special Adviser on Media and Publicity to the President, Femi Adesina, highlighted the military achievements in a statement issued in Abuja to commemorate the country’s Armed Forces Remembrance Day slated for Friday.

The Armed Forces Remembrance Day in Nigeria takes place on January 15 every year.

According to Adesina, this year’s event provides the opportunity to chronicle the landmark achievements recorded by the military in tackling security challenges across the country.

He listed the achievements as:

Boko Haram is much weaker today than in 2015 as attested to by the Governor of Borno State, Prof. Babagana Zulum, on December 6, 2020, when he said:

“From state-wide statistics on affairs in the 27 Local Government Areas since 2011, the fact is that in spite of recent happenings, the security situation in Borno State and indeed that of the entire North- East sub-region is still far better under Buhari, and this is based on records.

“For instance, unlike the years before Buhari when a number of local governments were no-go-areas, we now have indigenes safely back to Gwoza, Askira-Uba, Dikwa, Ngala, Monguno, Kukawa, Damboa, Konduga, Mafa and led by our traditional leaders, which no one could have visited not to talk of living there.

“Our Emirs were all in exile. Today, Bama is coming back to life and so is Askira-Uba, Damboa, Gwoza and others. Life is even returning to Baga. This was impossible before Buhari.

“In fact, it was not possible to move a few kilometres out of Maiduguri. Insurgents were so bold to attack and take over military facilities, like the Army Barracks at Monguno, Bama, Giwa Barrack and Multinational Joint Task Force Headquarters at Baga, to mention just a few.

“There were daily bomb blast in many parts of Maiduguri, the most populated part of the state, but all these have stopped under President Buhari. These are the records and no one can dispute them.’’

-This is in addition to scores of other terrorists and armed bandits killed during airstrikes.

– The military also rescued a total of 864 kidnapped victims across the country.

– Equally, 1,910 criminal elements were arrested and large cache of arms, ammunition and equipment were recovered during the period.

– Furthermore, a total of 46,581.8 barrels of stolen crude oil and 22,881,257 litres of stolen petrol were recovered by the troops of the Armed Forces of Nigeria.

– 5,281 livestock, 6,951 rounds of ammunition and 120 assorted rifles were recovered from bandits by the gallant troops in the zone. 455 kidnapped victims were rescued and 473 armed bandits killed. 461 arrests were made in the zone including high profile bandits, gun runners and bandits’ collaborators, while a total cash of N6,365,550 was recovered from bandits and their informants.

– 200 kidnapped victims rescued by troops of Operation LAFIYA DOLE. A total of 1,385 rounds of ammunition, 45 grenades as well as 95 assorted rifles were recovered from BHT/ISWAP fighters.

– addition, several gun trucks were captured, while some others were destroyed during airstrikes. 1,805 insurgents/terrorists including commanders were killed by troops aside scores killed through air raids/attacks. Additionally, within the period, 79 arrests were made including high value targets.

– Troops of Operations SAFE HAVEN, WHIRL STROKE and THUNDER STRIKE rescued 130 kidnapped victims, and 105 assorted rifles as well as 513 rounds of ammunition and 1,055 rustled cattle were recovered from armed bandits and other criminal elements in the Zone.

– 1,250 criminals including family members of the Darul Salam sect were arrested within the period. Furthermore, troops neutralised 125 bandits including militia gang leaders.

– Also, 47 kidnapped victims were rescued, while 72 vandals and criminals were arrested. A total of 4,250 bags of 50kg foreign parboiled smuggled rice were impounded and 45 boats engaged in illegal activities were impounded.

– Additionally, troops recovered 3,594 rounds of ammunition and 14 assorted rifles. Also, within the period, 23 illegal refining sites were immobilised, while 15 boats and 23 trucks engaged in illegal activities were impounded. In the same vein, within the period 35 kidnap victims were rescued, while 48 arrests were made.

– Specifically, in the Northeast, the Armed Forces have since 2015 recorded significant achievements in the fight against terrorism. The first actions of the Buhari Administration in that regard were:

– Revitalisation of the Multi-National Joint Task Force comprising Nigeria and her neighbours; Relocation of the Military Command and Control Centre to Maiduguri in June 2015 and Launch of Operation Lafiya Dole in July 2015.

– Several Boko Haram leaders have been killed or arrested, and the arrest of Khalid al-Barnawi of the Ansaru splinter cell brought an end to the terrorists’ tight grip on North Central Nigeria.

– The Federal Government is investing heavily in military hardware, including 23 new aircraft that have already been delivered and inducted into service, while another 18 manned aircraft and eight Unmanned Combat Aerial Vehicles (UCAVs) are being awaited, in 2021/2022. This is in addition to attack boats, patrol vessels, armoured tanks and so on.

– The Army established ‘Special Mobile Strike Teams’ in the Northeast, while the Air Force has established or is establishing new bases in various parts of the Northwest and North Central (Benue, Nasarawa, Taraba, Zamfara, Kaduna, and Katsina).

– Here is a selection of significant developments that show the progress in Borno State and the Northeast:

– El-Kanemi Warriors Football Club returned to their home base in Maiduguri in April 2016, two years after relocating to Katsina State because of insurgency.

– Following this, the Nigerian Army conducted its Small Arms Championship from March 26 to March 31, 2017 in the forest, a measure aimed at enabling the Armed forces to dominate the area, and avoid regrouping by terrorists.

– Chairman of the Christian Association of Nigeria, Borno State Chapter declared 2017 Easter Celebrations as the best and safest since 2009.

– Arik Air resumed flights to Maiduguri in May 2017, three years after suspending operations to the city.

‘Nothing must happen to Kukah, he did nothing wrong,’ CAN cautions Islamic groups