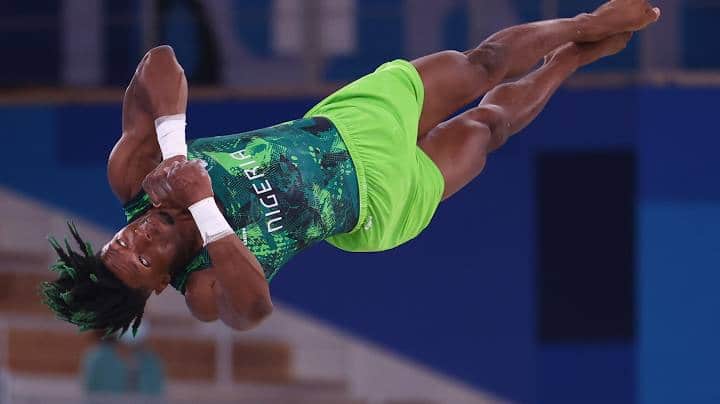 It has not been a very great start for Team Nigeria at the Tokyo Olympics since the official kick-off on Friday, 23 July.

The team’s gymnast, Uche Eke on Saturday morning, missed the chance of qualifying for the quarter-finals in the gymnastics event.

Competing in the men’s all round artistic gymnastics event, Eke placed 36th with a score of 74.765 which was not enough for a place in the last eight.

The 24-year-old was Nigeria’s sole representative at the on-going Tokyo Olympics.

Also on Saturday, Esther Toko could not make it to the quarter-finals in the women’s single repechage 2 in the rowing event, after placing fourth with a time of 9:07.54.

Although Toko missed out on chances of a medal, she qualifies for the semi-final EF round which will determine her overall ranking in the event.

Also, in the women’s singles in table tennis event, veteran Funke Oshonaike lost 4-1 to Juan Liu of USA in the preliminary stage.

Meanwhile, Japanese Naohisa Takato has captured Japan’s first gold medal of the Tokyo Olympics with a win over Taiwan’s Yang Yung Wei in the men’s under-60 kg final at Nippon Budokan on Saturday.

Takato made amends of his failure to claim a gold medal at Rio 2016.

Funa Tonaki already claimed silver in the women’s under-48 kg to give hosts Japan its first medal of the Games.