Nollywood actress Tonto Dikeh has reacted angrily to the constant exposure of people living in Port Harcourt, the capital of Rivers State, to polluted carbon particles known as soot.

In a post on her Instagram page, the mother of one who had a troubled marriage with her ex-husband Olakunle Churchill said; “They are killing my people and its soil slowly but very fast.”

The thespian who doubles as a musician also revealed in the post that she had waxed a new song as she hopes Nigerians from all walks of life will rise and chant in one voice to stop the soot emission in Port Harcourt.

“The menace of soot emission in Port Harcourt has not yet abated. Vulnerable victims, many of whom are oblivious of the what lies ahead include soldiers, policemen, politicians, lawyers, traders, school children, mothers, fathers, engineers, pharmacists, clergy, doctors, media personalities, fishermen, farmers, comedians, praise singers, lovers, haters, wailers, lecturers, scientists and the entire population.

“I composed this song in the (forlorn) in the hope that humanity will rise and chant a in one voice to STOP THE SOOT. Please sing along. Let’s share without ceasing,” the actress wrote on her Instagram page.

Experts, especially medical doctors in Port Harcourt have continued to warn about the health implications that may arise due to the constant discharge soot (a mass of impure carbon particles) which is as a result incomplete combustion of hydrocarbons arising from illegal oil bunkering in the state capital and its environs. 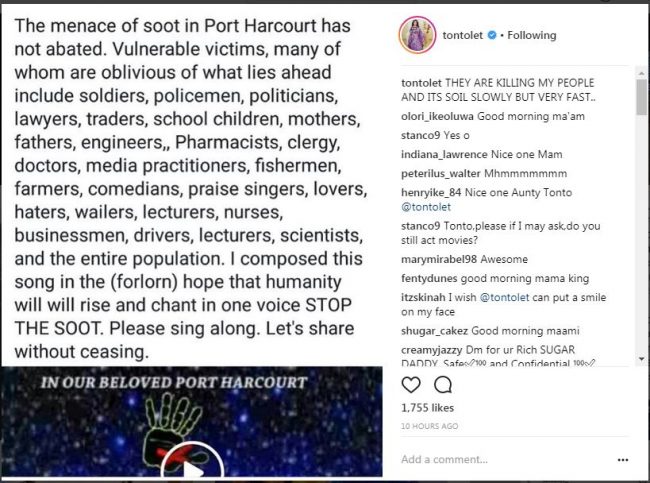